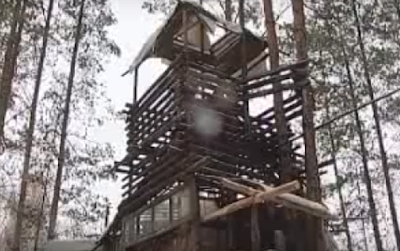 this picture and the next two: screenprints from the
video by Yakov Shtopor (see documentation)

The pictures show a single handedly built wooden castle situated in a wooded area between  Yekaterinburg and Verkhnyaya Pyshmain in Russia, a singular architecture that eisted for about the first ten years of the 21st century.

This castle was created by Alexander Nemov, a retired forensic expert at Yekaterinburg's police force.  In the early 1990's he acquired a plot of land in Yekaterinburg where he built a house with a curious architecture that did not comply with the official regulations. Rather than spending money to adapt the house, he sold it, and -meanwhile retired- made a trip around Europe from the money.

Once back, he decided to build a shelter in the forest and continue his life there, in particular to test his own strength and distance himself from civilization. That happened around the year 2000. 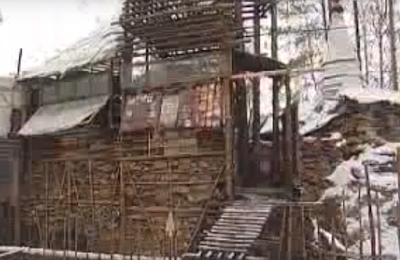 Nemov did indeed succeed in continuing life in this way.

On a forest plot he did not own, using stones, clay and wood available around, he constructed a house with three floors, towers and turrets, transitional galleries and bridges. It had terraces and various interior rooms, such as a bedroom, a sauna, a workshop and a library.

The house could be heated with a wood stove. There was obviously no electricity, but Nemov had rechargeable batteries working on solar cells, so he even had access to the internet.

Nemov stressed that his building was a castle and not a fortress. He had improvised kind of a cannon that could fire fireworks and ward off strangers, but above all had a decorative function. 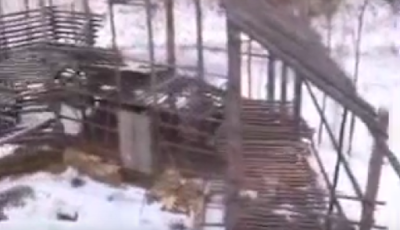 The newspaper articles published in the autumn of 2009, report that around that time the owner of the plot of forest had claimed his property and that Nemov had indicated he would leave. He said that he would find a new home, this time a cave in an area further away from the urban civilization.

It is not known if this new adventure indeed took place and resulted in a new home for Nemov, nor is any information available about what happened to Nemov's singular architecture.


note
¹ This post is based upon a number of articles in Russian media published in the fall of 2009, which however all rely on one source.