The two pictures give some idea of what this wonderful installation is about, but to fully appreciate it, one should see it in action, so take a look at the videos in the documentation.. 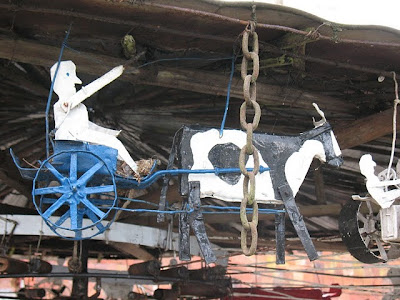 Born prematurely, Pierre Avezard was deaf, he could not see very well and he was small in stature. Because of his handicaps already as a youngster he was rather isolated. He only had two years of primary education and had to earn his living as a cowherd.

A gentle person, nicknamed Petit Pierre, he lived in a small house on the premises of the farm in Fay-aux-Loges where he had his job. On an adjacent plot of land near his house in 1937, when he was 28 years old, he constructed a wooden Eiffel tower of 23 m (75.4 ft) high.

Petit Pierre had a gift to make creative and technical constructions from all kind of scrap materials and he liked to cut tin blades into impersonations of people, animals, cars, bikes and so on.This was how he began constructing a merry-go-round, combining all devices he created out of scrap metal into a machinery that could turn around and had all kinds of moving features. He has been working on this project from 1937 until 1957.

Initially activated by stepping on pedals, the installation later on could be put into action by an electric motor of a washing machine. The manège is showered with moving and rotating gadgets, unexpected sounds and water projections, which often have a humorist effect, while the total display brings about admiration, joy and emotion.

First opened for the public in 1955, from 1957 on the manège would be in full swing on Sunday afternoons in the summer months.The shows attracted a lot of spectators, not only local families on their Sunday afternoon walk, but also visitors from further afield, such as Paris.

In the early 1980s Avezard, who was in his seventies, gradually encountered more difficulties to continue the Sunday shows. His health deteriorated, he got a stroke and had to be hospitalized for some time. Also, the planned construction of a new freeway threatened the survival of the installation.

Avezard moved to a home for the elderly in Jargeau, some seven km to the south. He passed away in 1992.

If left without supervision, the installation would have been vandalized and demolished. But a real miracle happened. In agreement with Pierre Avezard, a group of friends of the Manège, led by Alain and Caroline Bourbonnais, in 1987 dismantled the machinery and re-installed it at the premises of La Fabuloserie.

On August 26, 1989, the Manège was inaugurated on its new location. Being too weak, Avezard was unable to attend the opening.

Since it is one of the showpieces of this museum of art hors les normes in France.

Video's
* Video (a film on super 8, 5'02") made in 1977 of the Manège at is original location, first published on YouTube end May 2019 by Michel Avezard, a nephew of Pierre Avezard

* Video, with scenes of Pierre Avezard and the Manège, also on its original location (YouTube,
6'.59", uploaded June 2011, from the short film Petit Pierre {1979}, made by french filmmaker Emmanuel Clot)

* Video by Marc Rohner, Artprems (Daily Motion, September 2012, 16'41"), presentation of the installation after the OpUS group in September 2012 had repaired some long time stagnant parts, introductions in French, scenes of the Manège in operation from 8'20" on.

note:
¹ The Fabuloserie is a (partly open air) museum in Dicy (France, Bourgogne area), opened in 1983, which exposes all kinds of outsider art creations as collected by Alain Bourbonnais (1925-1988)
More about the Fabuloserie on the page about museums.