When young the forest was his habitat and then later in life he began transforming it into an art environment.

Pierre Rapeau (1935-2007), a teacher of natural sciences in the Paris region, was born in the Périgord area of France. He had a fond memory of the walks he made with his grandmother in the local forest, collecting mushrooms and herbs, while grand mère told him fables and stories of former times, like grandmothers do.

A self-taught artist, Rapeau made paintings on canvas, but later in his life after a divorce in the 1980s he preferred to be on himself with his sorrows and "to use nature as his sketchbook".

So he got accustomed to leave in the early morning and visit the forest of his childhood, alone, decorating rocks and tree trunks with paintings, in this way providing these natural items with all kinds of expressions, eyes, faces, regards..... 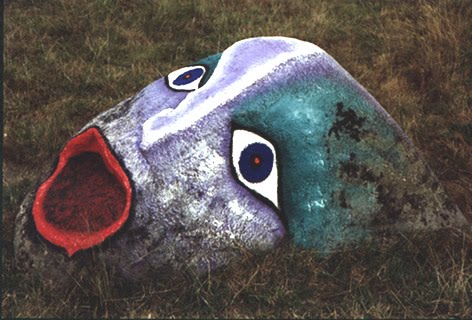 Rapeau's artwork probably can be seen as a kind of land art, but one could also say he made an art environment, transforming parts of the woods he considered as his habitat, into an ensemble of artworks.

In 2011 some twenty-five decorated items still existed, which were cared for by a friend of Pierre Rapeau (according to the weblog Bonheur de lire). The internet hasn't information about the situation in later years.

French filmmaker Yannick Rolandeau, impressed by Rapeau's creations, wanted to make a film about the work, but Rapeau for a long time declined to co-operate, because he preferred to stay anonymous. When he finally agreed,  Rapeau died before the film could be made.

Documentation
* Yannick Rolandeau wrote kind of an In Memoriam for Pierre Rapeau, explaining in this text what kind of documentary he had wanted to shoot about life and works of the artist. This text, published on Rolandeau's website (not available anymore), is available in English on the website OEE texts.
* Article (undated) by Jeanine Rivais on her website
* More pictures on the website of Michel Gombart and on the website Oui....mais......

Although Pierre Rapeau did not make his creations for a human public, articles about his work have been published and in September 2008 an exposition was held in his honor (la Beaudrigie, 23800 Saint Jory de Chalais, Dordogne, France).

Pierre Rapeau
le Bois aux Créatures
24300 Abjat sur Bandiat, dept Dordogne, region Nouvelle Aquitaine, France
the part of the wood with the decorations in
the forest is private property, but it is open
to the public (ask locals or tourist office)