The inscription on above  money box reads N'OUBLIE PAS LE CRÉATEUR (do not forget the creator). This box was on the fence of the garden, so visitors could pay a donation after visiting the site.

Raymond Guitet (1876-1956) lived in Sauveterre de Guyenne, a community in the south-west of France. He was a market-gardener (jardinier) by profession, trading in vegetables, fruit, eggs and poultry. And he also was active in the local government acting as a deputy mayor during some periods before 1940.

In the late 1940s he began making sculptures which he displayed in his garden, working in the same tradition as Gabriel Albert, Fernand Chatelain, Rene Escaffre and others. It is somewhat curious to note that some authors describe him as a humble edition of the Palais Ideal, since facteur Cheval's concept was quite different
The website Habitants-Paysagistes (Lille Art Museum) has as series of photos by Francis David, which present the site as it original capacity.


The garden has been referred to as zoological, and indeed Raymond Guitet has created a number of sculpted animals. But he also made sculptures of personalities, famous ones like Jeanne d' Arc and general leClerc, and allegorical ones like the three wise men (hear, see, keep silent...)

The site is in decay

After Guitet had passed away, the garden was no longer cared for. Apparently no one in the community felt inclined to help maintain the site, so the garden steadily declined.

The photo below (by Bruno Montpied) shows how in May 2008 the site looked like. 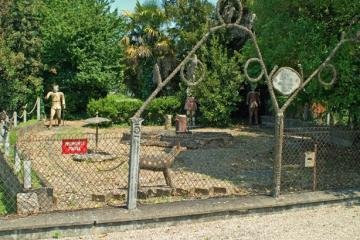 Many sculptures have been stolen and most of those still present (like Jeanne d´Arc, above) are in decay.

Bruno Montpied, author of the weblog le Poignard Subtil, in his post of May 31 2008 has reported about his visit to the garden, describing it's grandeur and décadence.

It´s tragic, such a decay.

Being that as it is, let´s keep in mind the text on the money-box and let's remember Raymond Guitet as the creator of one of France's interesting art environments.
Documentation
* Photos by Francis David of the site before its neglect on the website Habitants-Paysagistes (Lille Art Museum)
Raymond Guitet
Le jardin zoologique
Sauveterre de Guyenne, dept Gironde, region Nouvelle Aquitaine, France
site in decay
Posted by henk van es at 1:47 PM