The cottage depicted above has been decorated with shells by Kevin Ffrench (1921-2003), which -as has been said-took Ffrench over thirty years.
These decorations show a variety of lozenge-shaped, circular and other geometrical patterns, interspersed with some scenes that refer to local events or famous buildings.

The internet has no biographical details about the author of this art environment.

Following Ffrench's death, the cottage in 2006 has been renovated with financial assistance of the Irish Heritage Council and for some years it was exploited as a holiday home. However, as far as I understand, it currently is inhabited by Kevin Ffrench's grand daughter.

In August 2019 it was announced that the thatched roof of the house, that over the years had been damaged will be repaired with financial support of the Irish government, 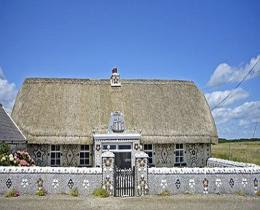 The scene on next picture represents Tuskar Lighthouse on Tuskar Rock, off the Irish south-eastern coast. 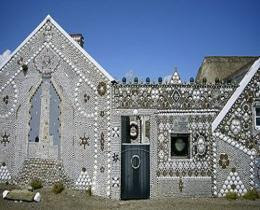 This part of the coast around 1200 has been raided by the Normans, who built a stronghold over here near the community of Bannow.

* A 1.43 min video on YouTube of interesting places in the Bannow and Cullenstown area also has some pics of the shell cottage (at 1'20")