Siouville-Hague is a small community on the Normandic coast in France. It boasts a very wide, sandy beach and in the 1970's french celebrities would stay there for a holiday. The beach is still there, but today's celebrities enjoy their fame elsewhere.

From an art environments point of view Siouville has kept its fame, because of a house and a garden decorated with shells that is located in the community. 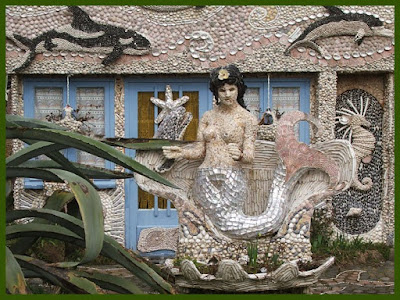 Decorating the house and creating the sculptures in the garden was a project of Pierre Clément. He was a copper-smith in the region of Paris, who used the house as a holiday home. Currently Clément is retired.

Starting around 1997, the project took him about ten years.

Apart from Sophie Lepetit's weblog, which has a series of pictures (may 2010) of the site, there wasn't much information on the internet about this art environment.


However, in September 2019, France 3 TV Bretagne published a video on YouTube  in which Mr. Clement and his wife get more than ten minutes to show their living environment decorated with shells, while also actively putting the shells on a wall (starts at time 14.50).