The picture above shows Guerino Galzerano in front of one of his buildings, a castle-like structure. Decorating constructions with pebbles was his specialty. He would use thousands and thousands of these little stones which abundantly could be found in the local rivers.

Guerino Galzerano (1922-2002) was born in a small village near the Italian community of Castelnuovo Cilento, south of the cities of Napoli (Naples) and Salerno. His father died, when Guerino still was a young boy, and he would attend school only for a limited number of years.

During World War II, conscripted in the Italian army, he witnessed the horrors of the battle field, which may have traumatized him. After the war, when a friend of him was assassinated, he became a suspect because -as the story goes- he didn't weep at the funeral. He was sentenced and put in (psychiatric) custody for a number of years.

In 1956 Galzerano married Teresa and settled in Castelnuovo Cilento. To earn his living he went to Germany as a guest worker.

It so happened that in 1970 some dramatic events took place: rumors (true or not) about a love affair of Teresa made Guerino return to Italy and threaten the involved man and his mother. Once more he was convicted and put in jail.

When in 1977 he was a free man again, he settled in the house in Castelnuovo Cilento (Teresa had meanwhile left for Germany). Living there a simple life, alone, with few means, he began decorating the house in his characteristic way, using these little stones from the river.

This way of decorating may have to do with Galzerano's preference for old, classic forms of buildings, he may have seen while travelling around in rural Italy, as he probably has been doing.

He not only decorated the exterior of the house, the interior has been transformed by constructing alcoves, which, like the walls, have been abundantly decorated with pebbles. 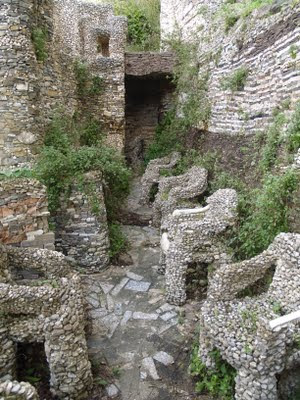 In the garden various decorated structures came into being.

To all appearances  the local authorities had no problems with Galzerano's decorative and architectural activities. 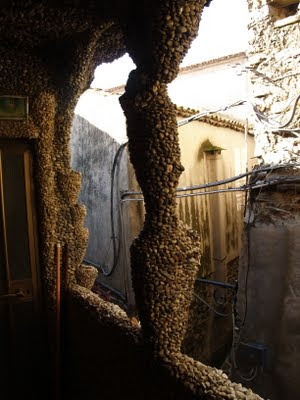 One activity however caused some commotion among the inhabitants: in 1982 he made his own tombstone with somewhat quirky texts.

After Galzerano had decorated his house and had made his tombstone, he began another, large scale project. On a plot of land of some 5000 m², property of Teresa, in the neighbourhood of Santa Caterina, he constructed a castle-like structure. Without any preconceived plan he made an enormous building, reflecting the prototype of a castle, with high walls, arches and towers.

This building is currently in decay.

The texts on the tombstone

The texts on above depicted tombstone read:

My name is
Galzerano Guerino
born in Chiusa dei Cerri
community of Castelnuovo Cilento
on 2 5 1922 a(nd) d(eceased) ... ..
the son of Giuseppe and of Maria Nilate.
here are my mortal remains.
here human law ends and begins Gods law.