The two structures presented in this post¹ have been created by by Aleksander Tarvis (1915-1999) in cooperation with people from the area around.

Tarvis was born and lived in the small community of Tagaranna on the northern coast of the Isle of Saaremaa, Estonia.

A seaman by profession, mainly sailing the Baltic on trips to Finland, Tarvis had a great love for the sea and sailor's life, which he gave expression by making more than a hundred paintings of both seagoing ships and the sea in all kind of circumstances.

He began painting after his retirement. His work has been shown in a number of expositions and some of his paintings have been reproduced on picture postcards.

His creative activity has earned him a reputation as an artist in the realm of Estonian folk art. 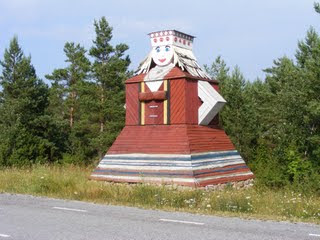 The two structures depicted in this post originally were windmills. Along the (windy) northern coast of Saaremaa where Tarvis lived, there happened to be a number of these windmills, mainly active, I presume, in producing flour.

When this mills became obsolete (because of industrially fabricated flour being cheaper?), at the end of the 1970s two of these structures, situated along the coastal road in the community of Ninase, close to Tagaranna, got another look.

This was a project commissioned by Mark Soosar, a filmmaker who at that time worked for Estonian television. He needed some distinctive characters as a background for a film about Sunday painters. With Aleksander Tarvis as leading artist and assisted by people living around, the mills were reconstructed into a Man Mill and a Woman Mill.

The man and the woman are a couple, named Piiret and Töll, who are mythological personalities in Estonian tradition. Both were giants, Töll was a friendly person, a king who was a farmer too. Piret was his wife. The two were always ready to help and protect the people of Saaremaa

The two structures became a must see for tourists and they are advertised in travel guides and on touristic websites, however mostly without any reference to Aleksander Tarvis as their auctor intellectualis.

My first version of this post ended with the sad note, that I had seen a report saying that the Woman Mill had suffered from a fire. Meanwhile I have learned  there was an accident indeed, but the damage has been repaired, and Piret and Töll still exist  as a couple.

note
¹ I am grateful to Sigrid Saarep, art historian from Estonia, for some additional information

Aleksander Tarvis
Piret and Töll
along the coastal road
Ninase, Saaremaa, Estonia
can be seen from the road
Posted by henk van es at 11:21 PM