Niilo Rytkönen, Sculptures around the farm

Life and works
Niilo Rytkönen (1928-autumn 2018) lived in the rural area of the small Finnish town Suonenjoki on a farm which is located close to the Kutsujoku river. The farm, located on a spot locally known as Jokela, has a large stretch of grassy land around .

Rytkönen has become known because of his creation of an extended art environment, both by decorating the walls of the barn of the farmhouse and by populating the meadows near the farm with totem like items, mostly made from natural materials collected in the nearby woods and countryside.

This non-professional artist began this creative activity at a later age, probably when he already was in his fifties. At some moment, when he was around outside, he was triggered by the form of natural items like stones and wooden stumps, an experience which made him aware of the anima these items may have and the persona they may represent.

He began collecting these items and in some cases he would color them with paint, blue, white, or other colors, as in above picture. Before he decided to exhibit these items on the wall of the barn, Rytkönen had to overcome some hesitation, thinking that the neighbours might consider such a decoration somewhat strange.

Maybe some did, but in general his decorative activity was appreciated and gradually Rytkönen expanded his exhibition space into the fields near the farm. 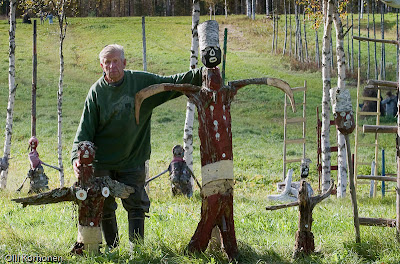 The fields got covered with rows of wooden poles, with heads or representations of birds on top, made of painted pieces of (birch) wood, a number of these poles fitted with horizontal branches that suggest arms, all together -because of the continuous repetition- delivering an extraordinary artistic scene.

Rytkönen also created life-size characters such as dolls, dressed with clothes from the flea market and drawn up in long rows on the meadows around the farm.

In general the creations were meant to cherish visitors and give them a good feeling. One could see items that express ironic or humorist comments upon actual social and political developments in Finland.

Rytkönen has been invited to participate in expositions of outsider art, both on a regional and national level.  He also was portrayed in the movie Self Made Paradise by  Cristoph Schuch  (Germany, 2007, 84').

Until the age of eighty he has been active in taking care of the exposition grounds and the exhibited items. Rytkönen passed away in the autumn of 2018. So far there are no messages about the future of the site.

More documentation and pictures
* an article by Olli Korhonen (October 5, 2011) in his weblog relates the story, following an article he first published in 2003 in a local newspaper. This publication may have been the first one that regionally introduced Rytkönen as an outsider artist. Translated into English, it has been republished in OEE-texts.
* article on ITE-net website
* a series of pictures (2018) by Sophie Lepetit on her website, here and here