Above is a recent picture of one of the sculptures that were part of an art environment created around a cave in Tuscany, Italy, by a hermit who lived in that cave from 1918 till 1932.

Maurizio Becherini (1859-1932) was born in the community of Gambassi Terme in the Tuscany area of Italy. He had various jobs, like barber, mason and tailor.

At an early age he lost his mother and later he lost his wife, leaving him with three children.

Seeking comfort in faith, in later life Becherini stayed for some time in a monastery and finally decided in 1918 to withdraw from society and to continue his life as a hermit. He found shelter in a cave on a lonely spot in the woods around Gambassi Terme, near a ravine and running water. 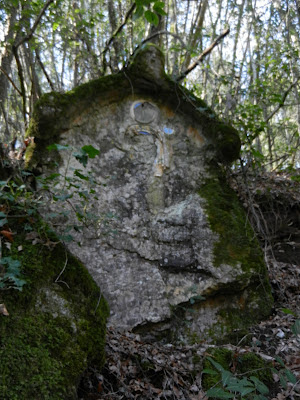 For some ten years Maurizio Becherini has been active in transforming this habitat into an art environment by constructing a small chapel, decorating the area with shrines and christian symbols and making a number of concrete sculptures of devote and holy people. 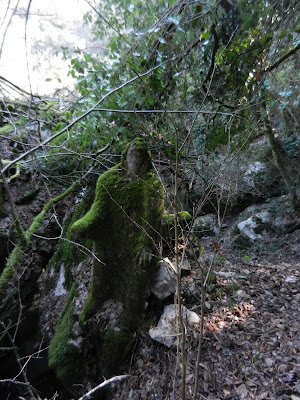 In the 1920s the site became a place of pilgrimage, known as la Gerusalemme di Toscana.

However, ecclesiastical authorities did not agree with this practice and Becherini was excommunicated by diocesal decree of January 25, 1928.

The site was left uncared for


After Becherini died in 1932, nobody took care of the site and gradually it fell into decay, although one still can see a number of remains, like sculptures overgrown with moss.

Visiting the site can be a difficult affair when the paths through the woods are slippery or snowy. However, medio 2014 a signposted foot-way was opened, created by a group of volunteers and school children, supported by the authorities of Gambassi Terme.

In recent years, the cave has become a sought-after destination for excursions, pious or not.

Documentation
* B. Borghini, Il vento racconta, 1990 (relevant pages - in Italian- available on weblog Vivendo questa vita, august 2011)
* The story of a visit to the cave by Giuliano Scheggi on his weblog Sole Pioggia Vente, March 8, 2012 (not available anymore)
* Pictures (2010) by Sylvano Gozzi on Google Photos
* Entry on website Costruttori di Babele (with pictures of the site)
* Article (January 2019) on website The Gambassi Experience

Video
* A video by Poveromai (2'21", You Tube, August 2011), shows it is not an easy walk towards the cave and has images of what has been left of the creations

Maurizio Becherini
La Gerusalemme di Toscana
(near) Gambassi Terme, Toscana, Italy
can still be visited,
finding your way through the woods may be dangerous,
in 2014 a signposted footpath was opened
Posted by henk van es at 5:10 PM

Email ThisBlogThis!Share to TwitterShare to FacebookShare to Pinterest
Labels: garden with sculptures from painted concrete, varied decorations on exterior walls