The small Romanian community of Sapanta has become famous because of its graveyard, crowded as it is with decorated tombs. Beginning in the 1930s, one of its inhabitants has created hundreds of wooden tomb decorations, transforming the graveyard into kind of a folk art environment.

Born in a Sapanta family that lived there for centuries, Ioan Stan Patras (1908-1977), already as a young man was active in painting, writing poetry and wood sculpting. As an adult he was commissioned to sculpt tombstones, traditionally made from oak wood.

For the first time in 1935 he added  texts to the wooden tombstones, describing in the first person and in the locally spoken language the character, the profession or a life event of the deceased.

Soon he would also add a brightly painted sculpted relief depicting that epitaph.
. 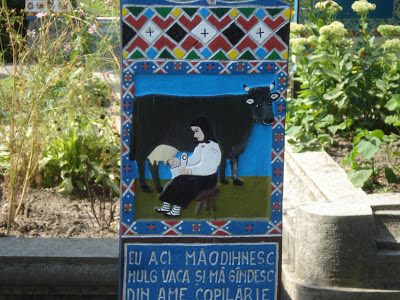 Such a way of  dealing with death would fit in the prevalent communal religious view, which considers the soul as immortal and sees death as a joyful passage from earthly misery to a better life afterwards. This is reflected in the willingness of the inhabitants to order similar decorations in the course of the following years. Wikiwand reports that Patras' approach has been approved, and suggested by the local priest.

As far as I understand Patras somehow has patented his way of working, and he evidently has been successful in positioning his one-man company as monopolist. All together he has made some 700 decorative structures during his life. 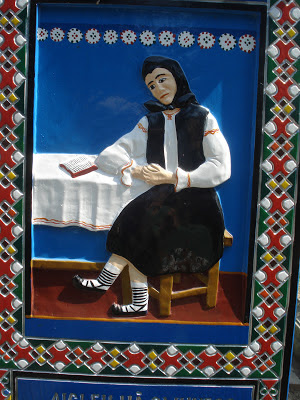 Patras used a specific blue color for the background of his decorations, painting the scene in a folkish, naive style in primary colors. His texts describe the deceased in a common way as he or she was in the memory of the villagers and all together they relate the tragedies and joys of the community.

The decorations and inscriptions are quite interesting to be studied from various points of view: linguistic, artistic and anthropological.

After Patras died in 1977, his work has been continued by his pupil Dumitru Pop, who went to live in Patras' house near the graveyard, a house that currently also can be visited as a museum.

The graveyard has become a touristic site

The graveyard is on UNESCO's world heritage list and it is among Romania's important tourist spots. It is visited by thousands of tourists, who -unlike the locals- pay an entrance fee to see the site.

Some documentation/more pictures
* Article on Wikipedia, with examples of texts and links to lots of pictures
* Bruno Mazzoni, Le iscrizioni parlanti del cimitero di Sapanta, Pisa (Ed Ets), 1999 -334 p
* Ioan Pop-Curseu, Some observations of the anthropological basis of artistic practice: the merry cemetery, Sapanta (Maramures) (available on PDF on the internet)
* Sanda Golopentia, The merry cemetery of Sapanta (available on PDF on the internet)

Ioan Stan Patras
Cimitirul vesel
Sapanta, Romania
can be visited by the public
Posted by henk van es at 12:43 PM