Above sign asked the visitors of an art environment in Tarragona, Spain, not to break anything. Tragically, this art environment, which was frequently visited in the early 1930s, currently has almost completely disappeared.

Josep Jordá i Olivé (1865-1953) was born in Tarragona, a city in the region Catalunya in north-west Spain.  He succeeded his parents, who had a shoemakers firm, and became an espardenyer, a fabricator of shoes made of rope (espadrilles) with a number of shops in Tarragona, he himself working and living 5 Carrer del Bou.

In later life, when he was in his late fifties, Jordá got psychic problems and his doctor advised him to find an activity which would give him distraction. After he had visited Gaudi's Parc Gruell in Barcelona, Jordá tried to model some clay into a figure and this inspired him to continue sculpting.

It would become his passion.

He owned a piece of land of some 30 ha at the outskirts of the city and around 1929 he began transforming this area into a sculpture garden he named Museu Jordá, a site soon designated by the public as Mas de les figures.

From cement Jordá created a variety of sculptures which he displayed on his piece of land. The entrance, marked left and right with a pyramid of some two meters (65 ft) high, was provided with a sign saying that one entered Jordá's museum.

Jordá was a prolific worker. In 1933 the site already had some 70 sculptures, and in 1935 it counted some 200. The sculpture garden got a lot of publicity and already in the early 1930's the public came to visit it in large numbers.

Jordá made stand alone sculptures, representing members of his family, politicians, saints, famous people, but also all kinds of animals. 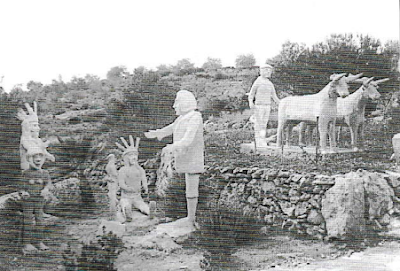 He also arranged his creations into scenes, such as the one in the picture above which shows Columbus meeting Indians when he had arrived in America.

Another scene, in the picture below, has Quixote. 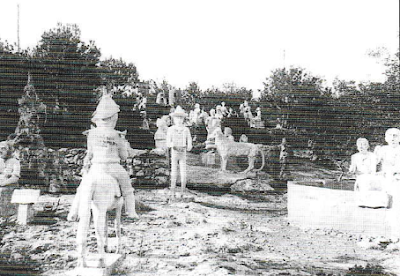 Jordá made his sculptures in situ and only occasionally he would model them on a mold made from iron wire. He mainly just added some straw to the cement, which he put in circles to build up the figures. Thus the creations were extremely vulnerable, especially the protruding parts.

But the lifespan of the creations was not only limited by Jordá's construction method, they also suffered from vandalism. Already in 1931 some sculptures were vandalized, but in 1935 a large number of sculptures was demolished, especially those that appraised representatives of the Spanish Republic and some that were seen as indecent.

This had to do with the rising tensions between those like Jordá who favored the liberal politics of the Republic and those who were in favor of Franco's nationalism and return to the values of former days.

Jordá closed his garden for the public and when after 1935 the civil war also raged in Catalunya and when in April 1939 Franco had become its winner, he kept quite and took care that his sculptures would not give rise to intervention by Franco's government.

After 1935 Jordá continued his creative activities, but he avoided publicity and public awareness. His dream that once his creation would be a public park, hasn't come true.


The art environment, left as it was, gradually degraded and nature regained it's rights. Currently one can hardly imagine how the garden's appearance was in those early years of the 1930s when it was crowded with hundreds of sculptures and visited by many interested people.

* A series of recent photographs on weblog Mi Mundo Amajaiak
* The site got a scholarly review in: Jo Farb Hernandez, Singular Spaces. From the Eccentric to the Extraordinary in Spanish Art Environments, Seattle (Raw Vision, SPACES, San Jose State University), 2013. An abridged version is on the website SPACES
* Scenes of Jordá's former site on the Tarragona Trip video by Sergio Flaquer Carraras (YouTube, August 2015, starting at 15.57, screenprints published here in agreement with the maker of the video)

Josep Jordá i Olivé
Museu Jordá
Tarragona Spain
located north of autopista 7,
in between Pont del Diable and crossing
of the TP-2031 (Carretera El Pont d'Armentera) and the AP-7
Posted by henk van es at 10:10 AM