On Vivi's weblog the caption of above picture reads Que du beau monde sur le sentier pédestre (Such beautiful people on the footpath).

Indeed, these pedestrians look very nice, but this also goes for the sculptures as such, which emanate a special charm.

Vivi Fortin, who made these sculptures, was born in November 1953 (Actually his first name is Yves, but he prefers to be called Vivi). He currently lives in the small hamlet named le Pas Français, which belongs to the community La Flocellière, located in the Pays de la Loire area in France. His house has a large garden of some 5000 square meters (0.5 ha).

After primary school he went to work. He became a mason and tyler, a profession he has practiced for some forty years.

In the spring of 2011 he got such troubles with his back, that he had to stop working.

Not being a man to sit quietly on the couch, Fortin looked for something to do, and although he had no artistic education at all, he first tried his hand on making paintings, to switch after some months to making sculptures, which would become his great passion.

As he told a regional newspaper in 2014: During my professional life I did not invent anything. Now I want to go on creating and performing, just to bring joy on people's faces.

Most sculptures of animals and people are not very large, about 30 to 50 cm high (except giraffes or so) and the whole collection of sculptures is more or less on scale.

Fortin began his sculpting adventure by making animals, mainly those from the farm and other well known ones, later he also portrayed famous personalities and characters from strip books.

In creating a sculpture Fortin first makes a model from iron- or chicken wire which he plasters with a layer of cement that he models with hands and fingers. All sculptures are painted in appropriate colors with a specific paint, with a composition he strictly keeps secret.

The creations populate the large garden, but also find a place on the courtyard of the house, occasionally displayed on table plates.

November 2016: a scene inspired by a fable by La Fontaine 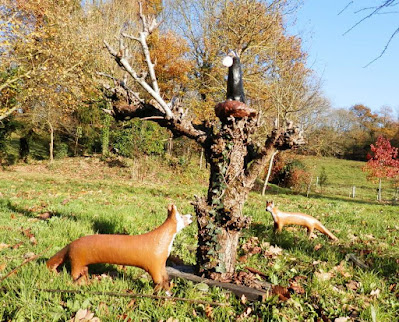 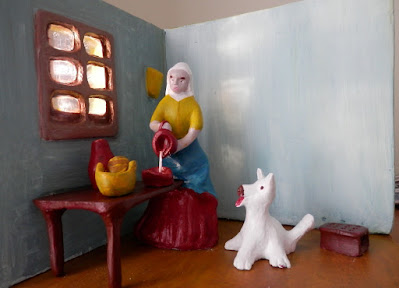 June 2017: a scene with whirling dervishes 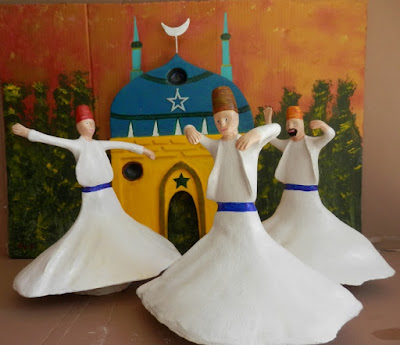 in February 2019 a scene with  "yellow vests" (gilets-jaunes, a recent protest movement in France) 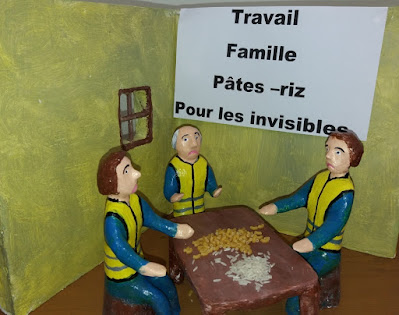 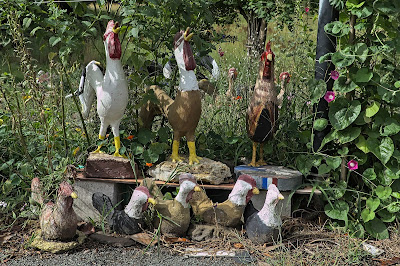 In 2021 Vivi Fortin began decorating a wall of his property with sculptures in high-relief, like below portraits of Simone Weil (1909-1943) and Jean-Paul Belmondo, who passed away early September 2021. 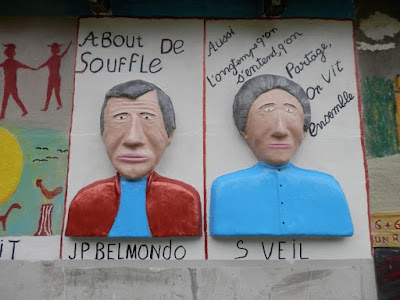 This project was continued in 2022, the image below showing the development until March of that year. 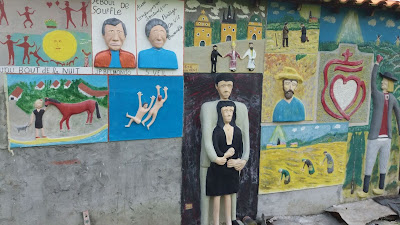 
note
¹  entente cordiale: a series of agreements in 1904 between France and the UK which marked the end of some 1000 years of conflict between these states