Collective of conscripts, Sculptures for Teykovo

Approaching the Russian city Teykovo around 2010, one could come across a set-up of some five wooden sculptures made in a naive style, a set not installed to regulate traffic, but to beautify the town.

It looks somewhat like Charles Pecqueur's decorated roundabout in Ruitz, France: a set of sculptures meant to beautify his hometown, however in his case also with a traffic regulating character. 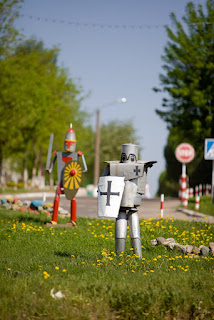 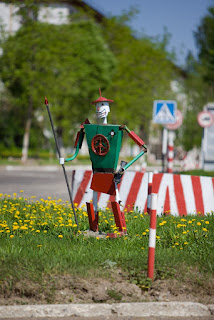 Teykovo is city of around 35.000 inhabitants, located some 300 km north-east of Moscow. From old a town with textile industry, it currently houses the strategic missile division of the Russian army.


The idea of doing a project to the benefit of the town -and especially its children- around 2010 originated in the leadership of the military garrison.

The project would include the construction of playgrounds. These sites as well as many other spots of the town would be embellished with sculptures, all with the deployment of the creative skills of young conscripts.

And then these playgrounds and sculptures were realized indeed. 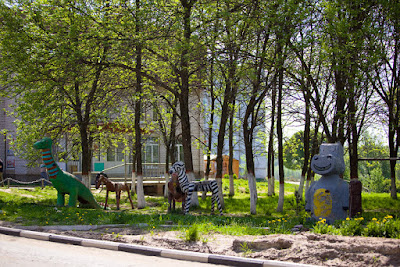 The pictures above and below show some playgrounds (as around 2010). The picture below has partly dugged in multicolored vehicle tires and a variety of sculptures, including Sponge Bob. 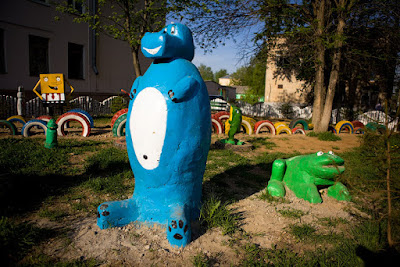 Other playgrounds are surrounded by partly dugged-in tree trunks, as in the picture below. 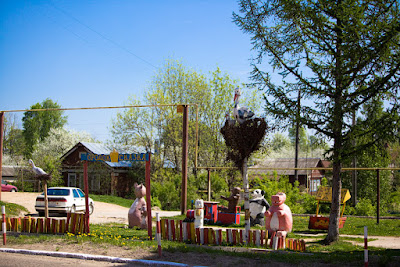 The most surprising aspect of the project is the large number of stand-alone mainly wooden sculptures. It's truly an open air festival of naive/outsider art.

The three-headed character below is just one example of the numerous sculptures created in the context of this project. 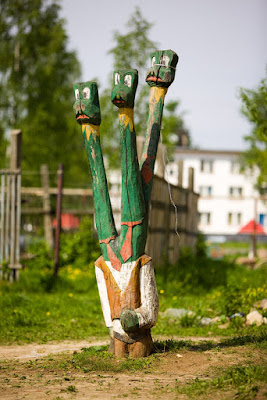 In general most sculptures are more conventional than the one above. They portray all kinds of animals, such as elephants, rabbits, pigs, snails and giraffes, children's favorites such as Spongebob and Humpty Dumpty and a variety of (mainly) male characters such as a policeman, a knight, a Don Quichotte and a soldier. 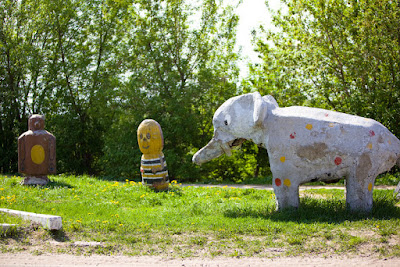 The internet has a number of (Russian) websites that show these sculptures, mainly as they were in the early 2010s, for example:
* Website RussiaTrek, December 2009, series of 15 photos of stand alone sculptures
* Michelleka on Live Net.ru, October 2011, 78 photo's, with explanatory text
(These pictures have been re-published on the Facebook page Outsider Art february 2014)

To my knowledge there are no recent (Russian) websites with information about the actual (November 2016) situation of this large series of sculptures, a scattered art environment, in Teykovo.