The Russian town of Tarusa, a community of about 9700 inhabitants, around 140 km south of Moscow, known for some popular museums such as the Tarusa Regional Museum of Local Lore and the Tsvetayevs Family Museum, since 2012 has a new museum with the special feature that it is a private enterprise managed by self-taught outsider artist Sergey Zharov.

Zharov, probably born in the late 1960s or early 1970s, like his mother and grandmother has lived his whole life in Tarusa. After his primary education he went to a carpenter's workshop where he was trained as a carpenter. 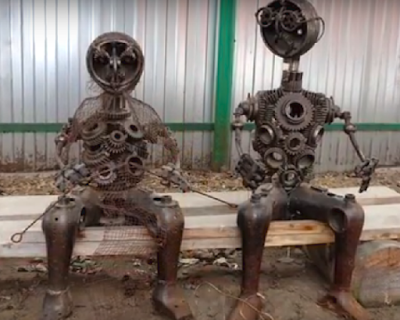 In the 1990s he began his own carpentry company, with a focus on the manufacture of furniture, doors and windows.

It became his hobby to collect objects that in earlier time were used in daily life and in housekeeping, such as sewing machines, gramophones, classic TV sets, meat grinders, irons, and so on. He would regularly visit the Izmailovo flea market in Moscow. 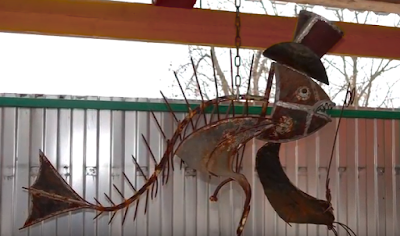 At some moment, maybe in the early years of 21st century. he also became interested in processing iron in a creative way, using a welding machine. His first creation became a skeleton of a fish, as in above picture. 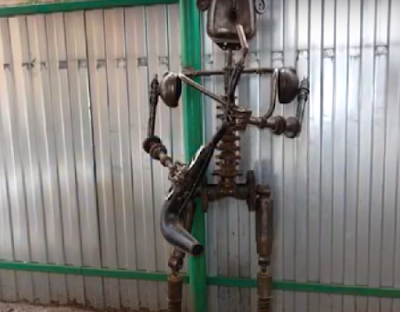 It turned out to be a successful undertaking and Zharov decided to continue on the chosen path. In the course of the following years he created a large collection of sculptures, all made entirely from iron.

The collection has a variety of personalities in various poses and also a number of animals.

The sculptures are made from parts of surplus devices. Zharov gathers all kinds of iron material such as cylinders, gears and bicycle chains, mostly from companies that demolish cars and other obsolete apparatus.

Once ready, the sculptures would be finished with a special lacquer to protect them from the influence of the weather. 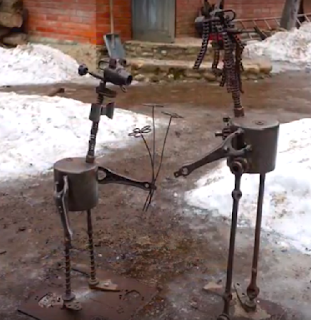 In the terminology of this weblog Zharov can be considered an outsider artist, but he doesn't see himself as an artist, saying that he would like to agree with a friend who characterized him as a seller of good mood. 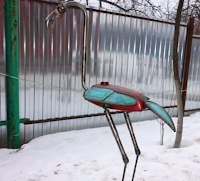 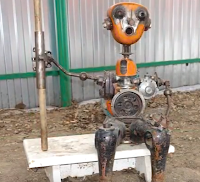 At a certain moment the collection of both the stuff from the past and that of the iron sculptures had grown to such an extent that - initially jokingly - the idea arose that it deserved a museum.

But Zharov thought: why not. And the museum was established indeed, based in the courtyard and an upper floor of Zharov's property. As said, it opened in 2012.

For Zharov this museum is, in his own words, "a way to introduce guests to the world of small fairy tale fantasies that can come from everyday things". 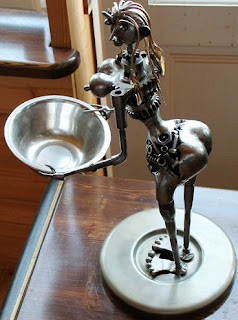 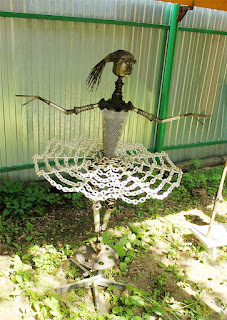 
The museum, which currently attracts some thousand visitors a year, is a welcome addition to the tourist potential of Tarusa.

In the summer of 2016, for the fist time the All-Russian Festival of Metal Sculptures was organized, a project presented on a forum of young people that had won a prize. The festival was held near Zharov's museum and for the occasion the name of the street on which the museum is located was changed to Iron Mile.