Tykocin is a small community in the region of Podlaskie in the north-east of Poland. It has some 2000 inhabitants (2012) and many sights, which means that more and more people from home and abroad visit it.
Whether the city also includes the garden of  Krystyna and Eugeniusz Msciwojewscy as one of its attractions is open to question, but from the point of view of art environments, this site is really a little gem. 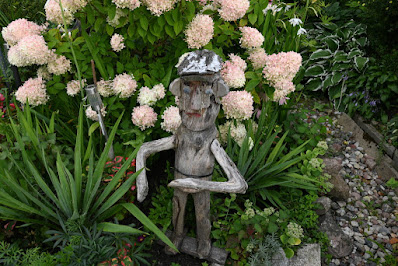 Eugeniusz Msciwojewscy had a job as a bricklayer and was involved in many construction projects in Tykocin and his wife Krystyna worked in a local shoe factory. Both are now retired.

Krystyna in particular takes care of the plants in the garden, which is located in front of the house, along its side and for a large part at its backside.

The view on Google Streetview, dating from July 2013, shows that the garden is richly overgrown with plants and shrubs, including large hydrangeas and barberries. 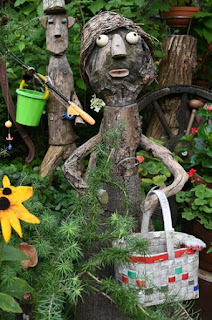 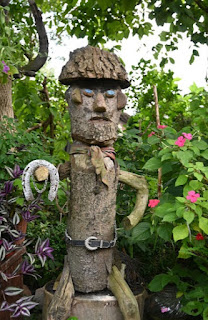 Eugeniusz takes care of the decorations in the garden. In particular, he made creations of human and animal characters, which he composed from tree branches, logs and other pieces of wood that he found during walks in a wooded area.
The sculptures are set up in the midst of the greenery, in a natural way, harmoniously and in a good mood. 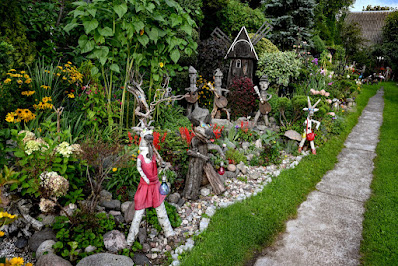 The human characters are not highlighted with paint, but they are provided with all kinds of attributes, such as fishing rods and bags, or characteristic clothing, necklaces, pendants or nice hats. giving them a recognizable qualification.

Manifested in this way, there are musicians, forest people, all kinds of ghosts, animals and so on.

As for the animals, especially those that are in the vicinity of people, such as storks and goats, are depicted 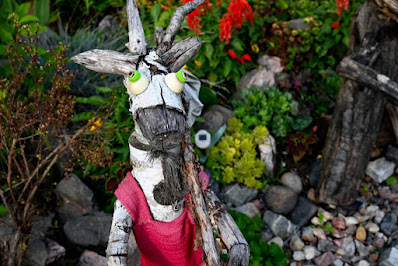 In the community of Tykocin competitions have been held  to see who has the most beautiful garden around the house, but the Msciwojewscy couple has never won a prize. An art environment is apparently still an unknown phenomenon here.
Documentation
* Article January 2022) on the weblog Znalezienie
Krystyna and Eugeniusz Msciwojewscy
Garden with wooden sculptures
ul. Jordyka 16
Tykocin, region of Podlaskie, Poland
visits on appointment,
site can be seen from the street
streetview
Posted by henk van es at 3:57 PM