Bodan Litnianski (1913-2005) migrated around 1930 from Ukraine to France, where he got a job as a bricklayer and a mason. After World II, that saw him captivated, he returned to France and bought a house in Viry-Noureuil near Chauny in the north of France. 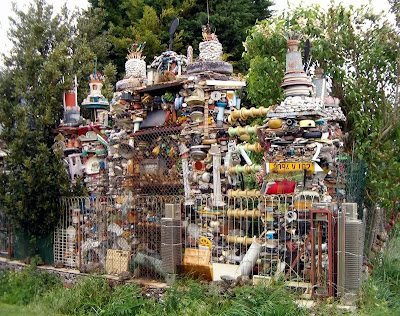 He had to restore this old house and when doing this he also decorated some outside walls with shells. This entailed that the neighbours began to denote the site as a garden of shells, a name also used in publications about this art environment

After he had decorated the exterior walls, Litnianski continued the project by decorating the garden along the street. He would haunt the region with a moped and collect discarded materials, like puppets, toys, all kinds of scrap...

He arranged these objets trouvés into very colourful columns which he erected in the front garden. All constructions were made very solid. Litnianski stood his ground in masonry indeed.

Working vertically maybe was not just a creative idea, it probably also was a practical necessity because of the small size of the plot.

Most columns have weather-vanes on top, mostly constructed on winter days by re-employing discarded materials.

Litnianski liked to meet people who came to visit his creation and he often told proudly that he had devised its layout entirely himself.

House and garden have been on sale

After Bodan Litnianski died in 2005, his wife Emilie Litnianski continued to take care of the site, until in 2008 she also passed away. From that time the site has been closed for the public.

But then, in June 2018 Laurent Jacquy reported on his weblog Les beaux dimanches that in 2016 the property had been sold to a private party. As photographs dated June 2018 demonstrate, the new owner (or owners) left the front wall, the decorations on the western wall and probably most of the columns intact and also restrained the (still extensive) vegetation.

Documentation
* An early report about this art environment was published in: Francis David, Guide de l'art insolite: Nord/Pas de Calais, Picardie. Paris (Herscher), 1984 -93 p, ill.
* Litnianski in 1998 at age 85 was filmed for Jarvis Cocker's Journeys into the Outside (1999, on You Tube in 2012, see my post of August 23, 2012). Here is the sequence with Litnianski (on You Tube/Les beauxdimanches):

* Denys Riout, introduction Agnès Varda, photo's Benjamin Teissèdre and Laurent Jacquy, Le jardin des merveilles de Bodan Litnianski, 2004  (Texts in French and English, the book can still be ordered at Editions Vivement Dimanche). In OEE-texts I republished the preface of Agnès Varda (2004).
*Also in OEE-texts the translation of an article (2009) by the architect Jean-Marc Huygen. This article is a plea to save the site as an example of how re-employment of the waste of society can contribute to durability.
*Authored by Laurent Jacquy in 2010 a well-illustrated website was published which is completely devoted to life and works of Bodan Litnianski (texts in French and English).
* Article on SPACES website
* Bodan Litnianski appeared in Agnès Varda's movie Les glaneurs et la glaneuse (France, 2000, 90m)
* Website Habitants-paysagistes (Lille Art Museum from march 2018 on) has a series of pictures by Francis David (1980, 1990) and l'Aracine (1981-1996)