The Maison sculptée de l'Essart, located in Brittany, France, is an art environment that is inspired on Robert Tatin's Musée des champs, located in the Mayenne area.

This art environment has been created by Jacques Lucas, who was born in 1944 in Poitiers, France.

Lucas studied art history, got a degree in archaeology at Rennes University, worked for some ten years for the french national department of cultural affairs and in the 1960's as an autodidact painter he began making paintings. 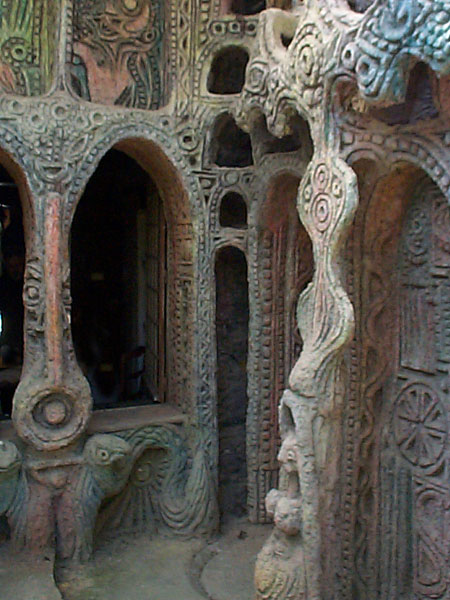 From childhood on he was fascinated by the atmosphere of cathedrals and medieval churches such as those one finds in Brittany.

In 1968 he bought a derelict house in Essart, a hamlet in the community of Amanlis in Brittany.

Using concrete he began making all kinds of structures such as walls, arcades. a chapel, bassins and free standing items, which he decorated with spirals, circles and comparable geometric signs,  occasionally interspersed with images of human faces or animals.

The decorations have often been finished with acrylic paint, but gradually the colors have disappeared due to the influence of weather and sunlight.


Lucas has been working on this project for over thirty years, his most active period being the years from 1983 until 1986.


In 1993 he moved to an atelier in Nice, where he concentrated on making paintings. The following years he would return to Essart during the summer months to continue his project there..

An association of friend currently owns the site

Problems Lucas encountered with the tax authorities in the early 1990s, resulted in 1997 in a court ruling formally saying that the house had to be sold.

An association of friends in November 2003 succeeded in buying the property and assured that Lucas could continue working there. Since 2008 he and his wife live permanently in the house in Essart, where Lucas mainly is active in making paintings. Interviewed by a regional newspaper in the spring of 2015 when he was in his early 70s, he explained that due to his age he no longer felt able to further develop the Maison sculptée.

In an article dated July 26, 2019 Catherine Janneau from TV3 France Bretagne interviewed Lucas and looked back on his career.

Videos
* fragment (2018) about the site on the North France trip video by Serflac (YouTube, starts at  24.12,  cannot be embedded here)