Polina Rayko (1928-2004)  was born as Pelageya Andreyevna Rayko in Tsyuryupinsk¹, Ukraine (near the city of Kherson, not far from the Black Sea coast).

She married in 1950 and got a daughter Elena (b 1951) and a son Sergei (b 1953). The family lived a modest life, deriving their income mainly from their garden. 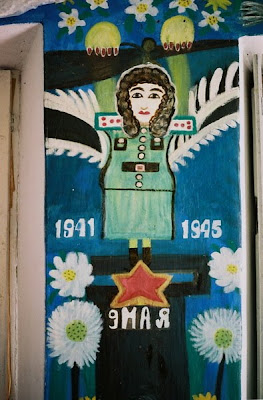 Life didn't bring Polina much happiness. In 1994 her daughter died in a traffic accident, a year later her husband passed away and her son became addicted and would take her valuables and threaten her if he was not in prison (he died in 2002).

In 1998, at age 69, Polina Rayko began making paintings, in this way trying to brighten her life somewhat, as she later explained. She had only a small pension and had to use the cheapest paint and brushes that one could get on the local market. But painting had become her real passion, in such a way that she has covered all the walls of her house with colorful decorations.

In the course of the years her work has become known, and although she was asked to make paintings in houses of other people, she never would earn much money with these activities.

In 2003 the local association Kherson Center "Totem"  became interested in her creations and took the initiative to produce a brochure about her life and work. However, before Road to Paradise was published (in 2005), Polina Rayko died (January 15th, 2004). 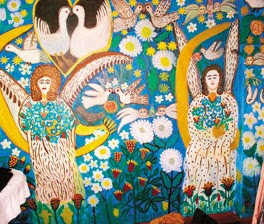 The house has been saved

Put on sale by the inheritors, the house was bought by a Canadian couple living in Ukraine. They felt it was important to preserve the decorated house for the future. Although the house as such is saved, the unprotected decorations are vulnerable if no protective measures are taken.

In December 2012 experts met in Kherson to discuss what could be done, but is not clear if actions followed. 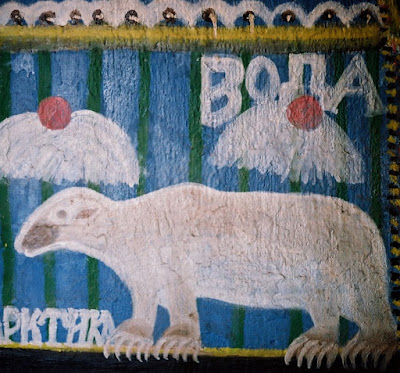 End 2016 a Kherson newspaper reported about the intention of the Cultural Department of the Kherson Region to buy Rayko's house and transform it into a museum of naive art. In the regional budget for 2017 an amount was earmarked for the purchase.

The Pinchuk Art Centre, Kiev, in 2018 organized an exposition A Space of One's own (October 30, 2018 - January 6, 2019) about the place of women in Ukrainian art, taking into account the specificity of the country's socio-political situation.

Polina Rayko was one of the artists presented,  the exposition showing some of her wall frescoes by means of life-sized photo montages.


N.B.
Polina Rayko's decorated house is located in a village on the east side of the Dnjepr River, near the large town of Cherson, which in the war of Russia against Ukraine on March 2022 was taken by Russia, but recently has been abandoned by the Russian army, that entrenched in the area east of the Dnjepr.
For the time being there are no reports about the situation of this art environment.
Documentation
* In OEE texts a translation into English of an article by Oleksiy Kachmar, published in the Polish magazine Kultura Enter (October 2009).
* On the website 3D Kherson a series of 360૦ pictures of all decorated rooms of the house
* Article (June 2013) on the website of the Ivan Honchar Museum (Ukrainian Center for Folk Culture), with a large series of pictures
* Article (November 2018) by Tatyana Kochubinskaya on the website Birdin Flight
* Article (November 2019) by Irina Staroselets on the website of news magazine Ukrinform
* Article (October 2020) by Evgeny Rudenko and Elder Sawakhman on the website of newspaper Pravda Ukraine

Videos
* Video made in 1998, some years before Polina Rayko died, by Petrushenko Laysa Mykhailivna, with Polina talking and a variety of shots of the interior decorations (YouTube, 13'05", added in 2005 to the collection of the Polina Rayko Charitable Association, added to YouTube 2018)

* Video (October 2020, YouTube, 15' 09") with a tour of Polina's house conducted by Vycheslav Mashnytsky (of the Polina Rayko Charitable Association) and Allo Zborovsk, keeper of the house and neighbour of Polina Rayko)