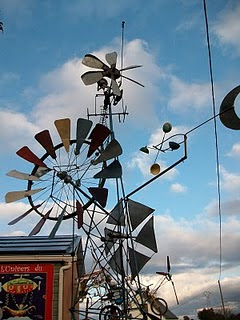 pictures courtesy of Sophie Lepetit,
from her weblog

Educated as a filmmaker, Robert Coudray (1954) from Brittany, France, had all kinds of professions, but eventually, following his vocation, he became a creator of kinetic constructions, mostly made from recycled and scrap material.

He calls himself in French a poète ferrailleur, what in English would be something like poet/scrap trader. In  the title of this post I left this denotation untranslated, because in English it doesn't sound as poetic as in French..

Around 1988 Coudray began making creations, which he located in and around his house. This eventually resulted in a most wonderful and fantastic collection of flying objects, mechanical puppets, machines, clocks, bikes, cars...... 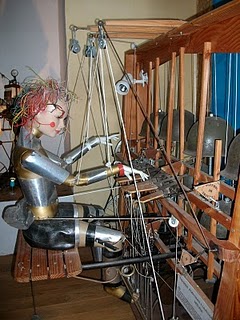 Most of these creations can make movements, such as above young lady. Outdoors there is a variety of whirligigs, set up amidst fairytale-like buildings. All together these creations constitute an amazing art environment, visited with pleasure as kind of an open-air museum by both adults and children.

Although occupied by making creations and running the museum, Coudray through the years continued shooting short films. As an example here is the trailer of the movie (24 min, 2008) entitled Le secret de Mermoz (The secret of Mermoz), about a solitary man, who as boy dreamed of flying in his self-made flying machine.

Prevalent in Coudray's cinematographic work is the theme of man pursuing his dreams.

All his life Coudray himself has dreamed of making one day a lengthy feature film. That dream has come true. From 2008 on with a lot of sacrifice a (rather modest) budget was raised and from October 2010 until July 2012 the film was shot, with hundreds of people from the region participating as figurants or as technical or administrative volunteers.

As Coudray says on the film's website: "We show that in this countryside that is remote from cultural powers, their subsidized structures and their standardized schemes, we are able to gather our energies to bear innovative ideas. We are all creative".

The movie, entitled Je demande pas la lune, juste quelques étoiles (I don't ask for the moon, just a few stars) had its premiere in March 2013.