In it's early years known as the Église Verte (the Green Church) and currently as the Jardin de Pierre (Stone garden), this art environment, located in the interior of  Brittany, France, has a spiritual connotation.

René Raoult (b. 1942), a man from the Breton countryside, who had all kinds of professions such as butcher, baker and healer (magnètiseur, in french), in 1968 as a self-taught artist also began creating wooden sculptures.

In the summer of 1984 something happened that would strongly influence his artistic production. A friend came by and informed him that in the woods a tree had fallen down. Raoult went to take a look and was fascinated by this fallen tree in which he saw a Christ laying on the ground..

He decided to sculpt the tree into a totem-like impersonation of the Christ and on July 14, 1984 this eight meters high sculpture was installed on a plot of land near his house along a departmental road in the community of Pléhédel in Brittany.

That night Raoult understood he had to equip this single sculpture with a surrounding protective shelter, kind of a church-like structure. So he continued making totems. altogether 19 large wooden sculptures, some 6 meters high, which he arranged in a circle, just as pillars in a cathedral.

These pillars got names, such as mother...father...moon.. sun.... Situated in between the pillars decorated granite blocks symbolized the elements. 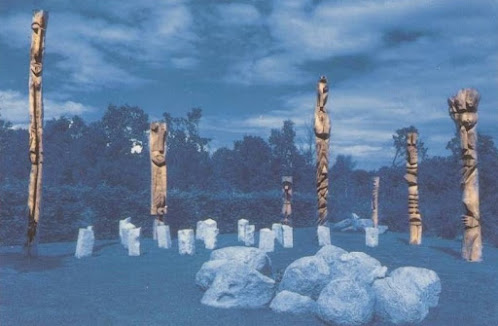 French travel-writer Claude Arz, who is known as writing about "mysterious France", has published an interview with Raoult (conducted around 2006) on his weblog. Here is a translation into english of a quote from that interview, which might be rather characteristic of Raoult's views:

"At nightfall, around a fire with twigs, a moved René Raoult explained me his desire to connect with cosmic forces. The fog was choking his words, blurring the tall silhouettes of the statues. “Every man needs to find his place, he said, a place where he will be fine, a sacred site”.  Later, around a good bottle of cider, Rene Raoult confessed me: "I am dissatisfied with the world in which I live. It is certain that the totems, planted in the ground, represent for me the desire to ascend, to connect me to the cosmic forces” 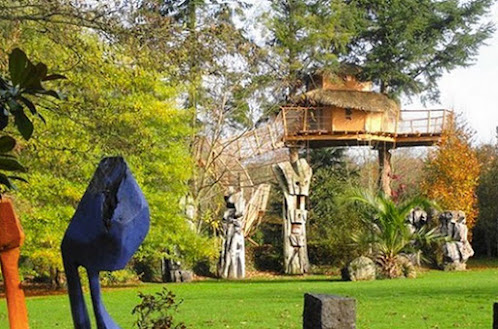 The site got new owners

In the early 2010s Raoult left his house in Pléhédel and moved to another part of Brittany.

The new owners turned the property into an ecological tourist accommodation with treehouses to stay overnight. The collection of totems and stones is carefully integrated in the design of Les cabanes du jardin de pierre (The cabins of the stone garden)