In the Netherlands Bertus Jonkers (1920-2001) in general is seen as an outsider artist. His artistic legacy is managed by the Dutch outsider art foundation de Stadshof.

Born in the city of Utrecht, as a young man Jonkers was a house-painter. Forced to work in Germany during the war, after the war he returned to Utrecht and -following his vocation- took lessons in art-painting.

Jonkers was a very creative person, who made paintings and etches and produced poems and prose.

From 1974 to 1994, when he was in his sixties and seventies, he lived alone in a house in Utrecht, that was scheduled to be demolished (what never happened however, currently the house still exists).

In this house, between 1989 and 1992, Bertus Jonkers constructed a miniature metropolis.

From sand, gypsum, glue and all kinds of small materials he made miniature buildings and other elements of a city, all together modelling an urban environment. The construction has become known as the Ideale Stad (Ideal City), but it is also known as City of Devotion

The creation grew and grew, and ultimately it occupied the floor, the walls, the ceiling, the stairs of the house and after some time it also stretched out into the garden. 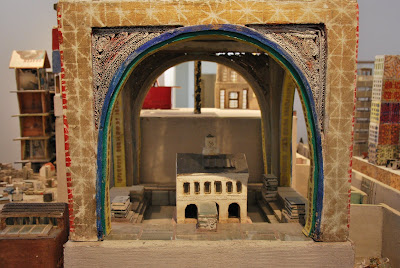 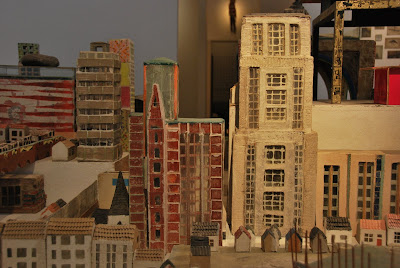 In 1994 Bertus Jonkers had to move to a home for the elderly. The part of the Ideal City which was still in the house where he had lived, was added to the Stadshof Collection.

In his small apartment Jonkers continued his creative activities. From 1995-2000 he made another, more compact miniature metropolis, this one named the City.

His artistic legacy is being cared for

Jonkers artistic legacy has been donated to and currently is managed by the Dutch collection of outsider art De Stadshof. The legacy includes the City and items of the Ideal City.

In 2014 Jonkers' miniature city was exposed in the Halle Saint Pierre in Paris (Sous le vent de l'art brut 2), where his work attracted a lot of  interest.

Bertus Jonkers
Ideale Stad
Utrecht Netherlands
originally located in a house in Utrecht from where it has been removed,
part of the Ideal City added to the collection of the Centraal Museum Utrecht
his creation the City is in the Stadshof collection in the dr Guislain museum, Gent
Posted by henk van es at 1:08 PM