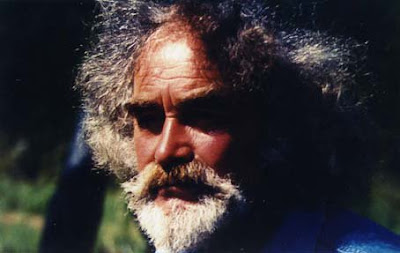 The Garden of Pagan Divinities is located in the small community of Fontenay-les-Briis, in the Ile de France area, south of Paris.

The garden has sheet metal sculptures, created by Robert le Lagadec (1927-2002), who called himself a poête-forgeron, a poet-blacksmith.

Le Lagadec was a son of Breton parents, who had moved to the Essonne area, south of Paris, where they worked in the regional sanatorium. As a young man he participated in the Resistance and after the war he joined the military and took part in the french war in Indochina.

After two years he left the army, returned to France and got a job in the sanatorium as head of the hospital's workshop, where patients could be active in creative activities like drawing and painting, but also acting.

Le Lagadec himself, although without artistic education, liked to make drawings and paintings.

In the late 1960s he turned to making sculptures. There is a story that he was inspired to do so when he was making a walk and stumbled upon a trunk and a piece of iron with a special appearance.

Anyway, he became fascinated by sculpting, in such a way, that he left his job at the sanatorium, to work half-days as gardener on a neighbouring property in order to have enough time to make sculptures. 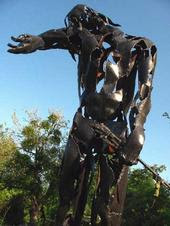 Le Lagadec for some thirty years has been active in welding and hammering recuperated metal, he coldly processed into large and robust creations. He gave them poetic names like Aliénation, En attendant Spartacus and Solitude du Poète (Alienation, Awaiting Spartacus, Solitude of the Poet).

The all together twenty rather impressive, four to six meters (13 to 19.6 ft) high sculptures created by le Lagadec are displayed in the Garden of Pagan Divinities, a plot of land not far from the house where he lived.

After his death le Lagadec's site was cared for by his widow and his son Dominique, who founded the Association Megafer. This association occasionally organizes open days (often in the first weekend of June, when in general there is a nationwide opening of gardens in France).

Documentation
* Article (1995) by Jeanine Rivais
* Website of the Parc Naturel Régional Haute Vallée de Chevreuse with a referral to an article in l'Echo
* Entries (April 2014) on the weblog of Sophie Lepetit with a variety of pictures of the site and the sculptures
-      april 25: overview
-      april 26: the various sculptures
* Article on SPACES website
Videos
* Trailer (on Vimeo 4;05) of Paroles de Fer, film by Mathieu Wilson (2004, 26 min, ).