Escaffre's art environment -a classic in France-  portrays the French countryside as many people remember it nostalgically.

The fifth in a generation of local masons, René Escaffre (1921-2008) from the small community of Roumens (Haute Garonne, France) when retired at age sixty began making sculptures, using modeled iron frames he covered with layers of concrete and painted in bright colors.

All creations were located in the garden in front of his house. 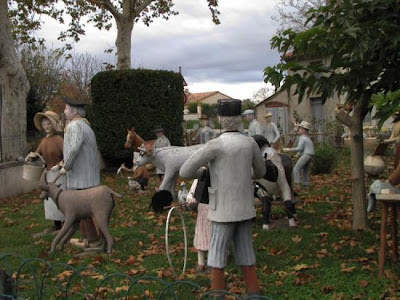 Escaffre made sculptures of people and animals, depicting scenes from daily life in the countryside as it was in the first half of the 20th century: farmers leaving for the market, children playing, artisans doing their jobs.

He portrayed la campagne in France as we imagine it and with melancholy remember as the good old days....... 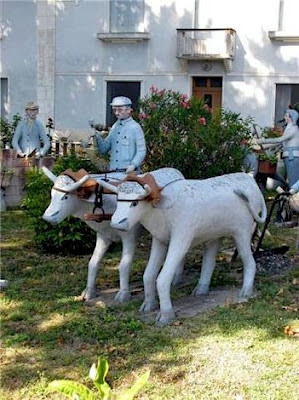 After René Escaffre passed away in 2008, the sixth generation of the masons company (René´s son) handles the maintenance of the sculpture garden.