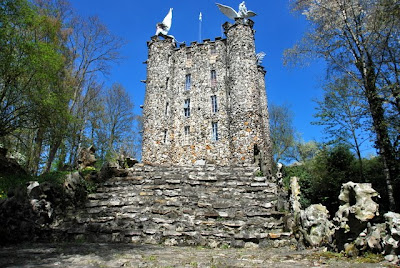 
Dominating the rural area around Eben-Emael, north of Liège in Belgium, the Eben-Ezer Tower is an exceptional creative construction, full of symbolism, made single-handedly by a man who worked it for over ten years.

Robert Garcet (1912-2001) was born in Mons, a city in the south of Belgium. At age 18 he moved from this city to the Jeker-area in in the north-east of Belgium, north of Liège and south of Maastricht, where he got a job as a laborer in the quarries in that area.

Eventually Garcet would become owner of a silex quarry.

He was very interested in geology, nature, the history of mankind and biblical studies and he wrote a lot of books (in french) on these subjects, in which he developed a personal vision of the creation of man.


Robert Garcet was a pacifist and after World War II, around 1947, he began making plans to construct a big tower as a symbol of peace for mankind.

In 1953 he actually began the project, which would take him over ten years to complete. With the occasional help of friends a 33 m (108 ft) high tower arose, mainly made from silex building-stones.

The dimensions of the tower are related to classical numerologist principles. So the sacred number seven is reflected in the four sides of the tower which each measure 7.77 meter, while the tower has seven floors. The structure itself has a lot of symbolism: the first floor is the earth, the seventh is heaven. 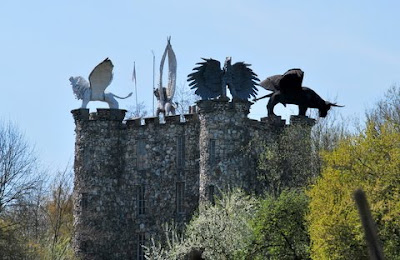 On the corners at the top four sculptures are displayed which impersonate characters of the the biblical book the Apocalypse (a bull, a lion, an eagle and an angel). 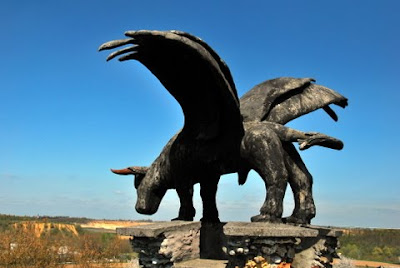 When visiting the tower one first passes the huge outside staircase and then one enters the room of the Cherubs with angels sculpted along a central column, murals representing biblical stories and a sculpted representation of the biblical book the Apocalypse.

Under the tower there was a subterranean tunnel system, like an old quarry. Garcet has interpreted this system as a around 70 million years old village and in his opinion the inhabitants of that village were active in sculpting silex stones into impersonations of people and animals.

This may be apocryphal.

Garcet's find however, in 1958, of the skeleton of a mosasaurus, a snake-like reptile with swim fins, should be authentic.

The subterranean area has been partly destroyed by a mine explosion. The remainder can not be visited by the public.

Museum
* This art environment, currently managed by a foundation, houses a museum, le musée du silex, which informs the public about Garcet's work and vision. Its website includes a biography and a bibliography.

Will the tower get a monumental status?

Documentation
* Robert Garcet appears  in Jarvis Cocker's Journeys into the Outside (1999, on YouTube in 2012, see my post of august 23, 2012)
* On Dirk Gillabel's website House of the Sun there is a page entitled "A 70 million old underground village" which has pictures and the story of Garcet's underground finds
Videos
* Markus May, Die Steine der Apokalypse (The stones of the apocalypse), documentary movie, uploaded may 2010, YouTube, in 8 parts, German spoken
* French filmmakers and photographers Clovis and Claude Prévost made movies of the Eben-Ezer site: La légende du silex de Robert Garcet, 1993, 41.40" and Eben-ezer, la tour de l'apocalypse, 1979, 27.50". These are available via INA-France.
* Video by David Galley La mystérieuse Tour Eben Ezer (3'18", YouTube, published may 2015)

Eben Emael, Belgium
in general open on afternoons from 13.30 - 17.00
(may close later in summer and in weekends, see their website
Posted by henk van es at 7:05 PM