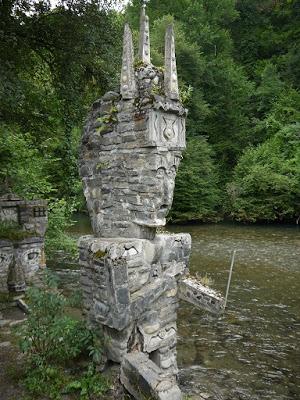 this picture and the next one
courtesy of Sophie Lepetit
This post has a review of an art environment that includes a variety of creations made from stone, exposed in the small river Lez that crosses the community of Alas in the Ariège area in the south of France.
Life and works

One day he got the idea to construct a terrace in his garden, which is located along the bank of the small river Lez.
Once he had constructed this terrace, he probably felt attracted to continue making such constructions, a feeling which isn't uncommon for retired people.
So for some 25 years he has been engaged in making an art environment in and along the river. using stones from the river to make sculptures, totems and singular architecture, some several meters high and decorated with inscriptions and symbols. 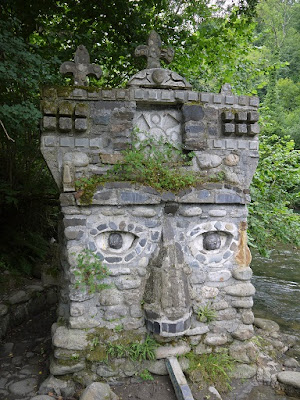 On a big rock in the river he constructed kind of a castle, a few meters high, a construction that at least three times has been washed away by the swollen river (and was rebuilt just as often).
Mathey passed away in 2008 at age 90,
Documentation
* Article on the website of the department
* Entry on the Art Insolite website
* Article (October 2012) in weblog mespetitspapiers, with a variety of pictures
* Article  (June 2015) on the weblog of Sophie Lepetit
Video
* Video by Patrick Boudier (YouTube, 5'13", undated (around 2015?))

Note
¹  During his life Mathey wanted to stay anonymous. After his death, however, his name has become publicly known, so I feel free to publish it here also.
first published dec 2008, last revised april 2020
Robert Mathey
Jardin de pierres
Alas, dept Ariège, region Occitanie, France
can be visited following a small public path along the river