Jean-Marie Piquemal, Notre Dame de la Goutte / Our Lady of the place where it drips

Born in a family of farmers, Jean-Marie Piquemal (1924-2001) in 1949 was ordained as priest, to be appointed in 1951 as pastor of the small community of Montardit, in the Ariège area in France.

When wandering around in the local woods, he used to collect (big) stones and bring them home. Kind of a facteur Cheval, but then Piquemal didn't transport the stones in a wheelbarrow, but in his 2CV. 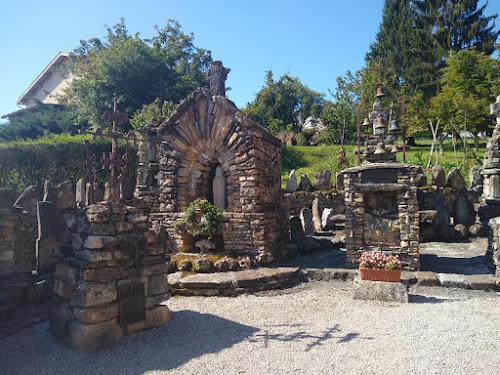 Assisted by a local mason named François Folch Corbi and by volunteers, Piquemal in 1968 began using these stones to construct a small religious complex including a chapel and a calvary with naive sculptures.


In addition to stone sculptures, various parts of the complex have been decorated with predominantly small-scale iron sculptures, as in the picture above

Artists from the region, who felt inspired to assist in embellishing the chapel, provided glass stained windows.

Located on a spot that is wetted because of dripping water, in french goutte, the chapel is named Notre Dame de la Goutte, but also le sanctuaire de la foi (the sanctuary of faith).

In 1976 the chapel was ready to be inaugurated. The whole complex, devoted to Our Lady, was ready in 1982. Every year on September 15 a procession is held.

Father Piquemal passed away in 2001