In general art environments are rarely located in an urban area. But here is an exception: the garden of Rosa Mir, created by Jules Senis, which is located in the midst of the urban area of Lyon, France.

Hospitalized because of a serious illness, he made the promise that if he would recover, he would create a beautiful garden in honor of his mother, Rosa Mir Mercader.

Jules Senis recovered indeed and in 1957 he began arranging the garden, which is located in the midst of blocks of houses.

He constructed pillars and arcades, which he abundantly decorated with shells. 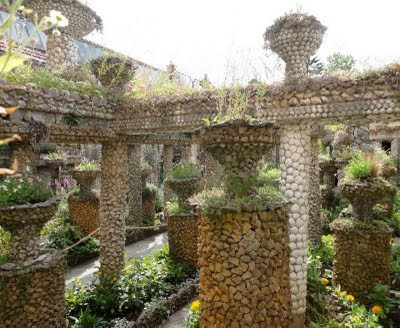 Working with vertical columns like Senis did, triggers associations with the working methods of Bodan Litnianski. The two artists probably did not know about each other. The similarity must have to do with the smallness of the plot they both were working on. The Lyon garden indeed is just some 400 m².

However, it is also possible that Senis has been inspired by the Alhambra, the Spanish monument he may have been familiar with. 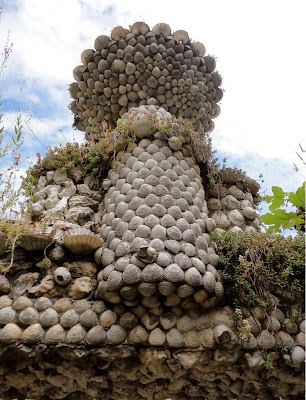 The garden has nice flowers and plants, like roses and lavender, which when blooming evoke a Mediterranean atmosphere. 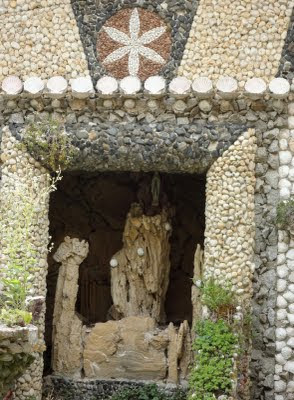 The garden also has a shrine with a small statue of the Holy Virgin.

Senis has been working on this project for twenty years, from 1957 until 1977. Some months before he died, in 1983, he was informed that the city of  Lyon in the future would take care of the garden. .

To ensure the continuity of the garden, in 1983 an association of friends was formed. Nowadays they focus upon its promotion by organizing events, editing a website and managing a page on Facebook.

The site is cared for by the city

From 1987 on the garden is actually being cared for by the city of Lyon. It has become a monument historique.

For safety reasons in 2011 the garden was closed for the public. In August 2015 the renovation started and on June 25, 2016, after ten months of work, the garden was reopened. The large upper bassins have been filled with plants and to the other parts of the garden some 5000 plants, imported from the Mediterranean, have been added.

Video
* The internet has a number of videos of this site, look here
* Here is a short one, shot when the garden had reopened by BFM Lyon (June 2016, YouTube, 1'35")
first published December 2008, last revised February 2022