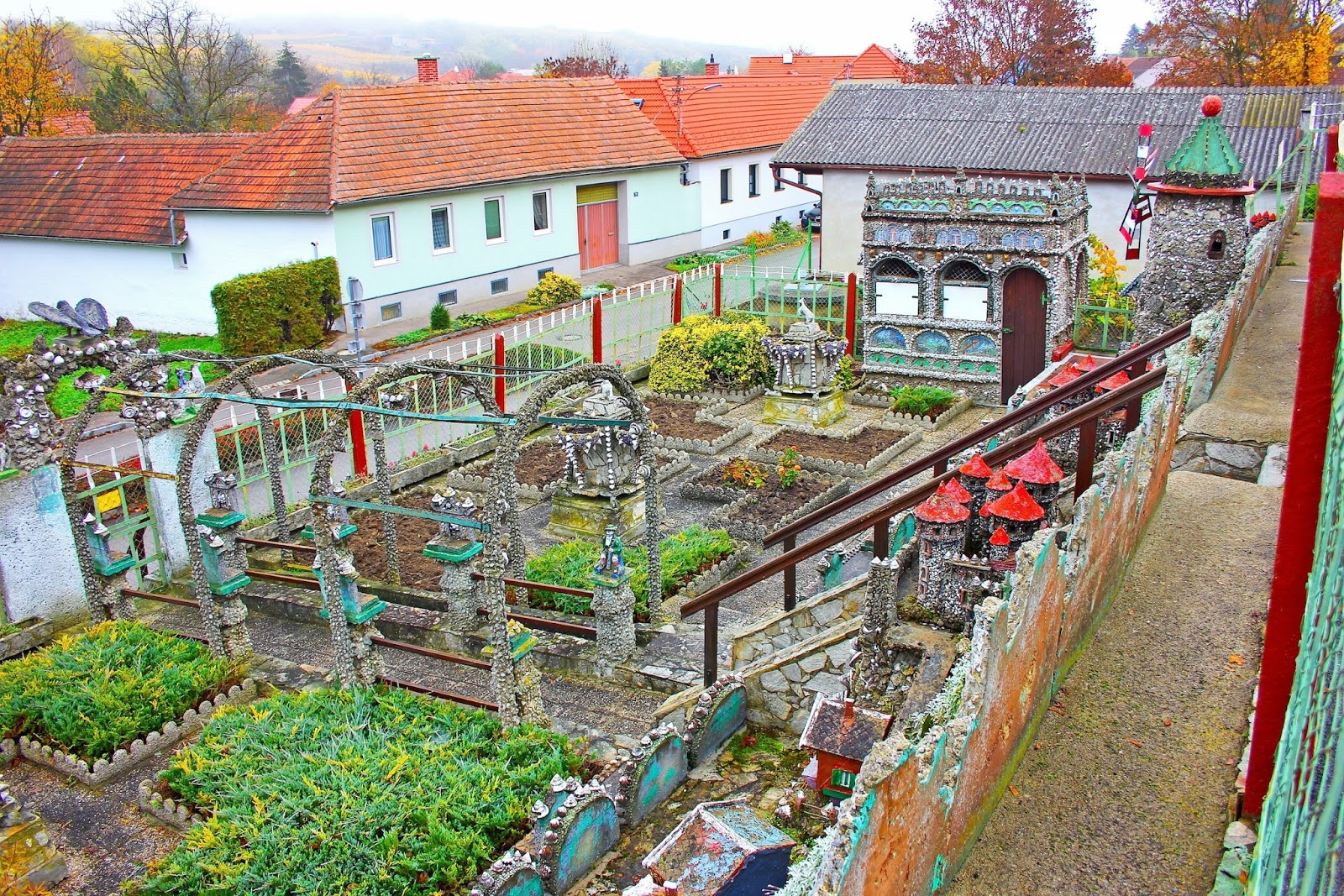 Although Austria has a firm reputation as regards outsider art in terms of painting (for example the Gugging Haus der Künstler), with regard to art environments the country just has a few sites.

One of these is the Muschelgarten in Röschitz, a community of some 1100 inhabitants in the north-easternmost state of Lower Austria. 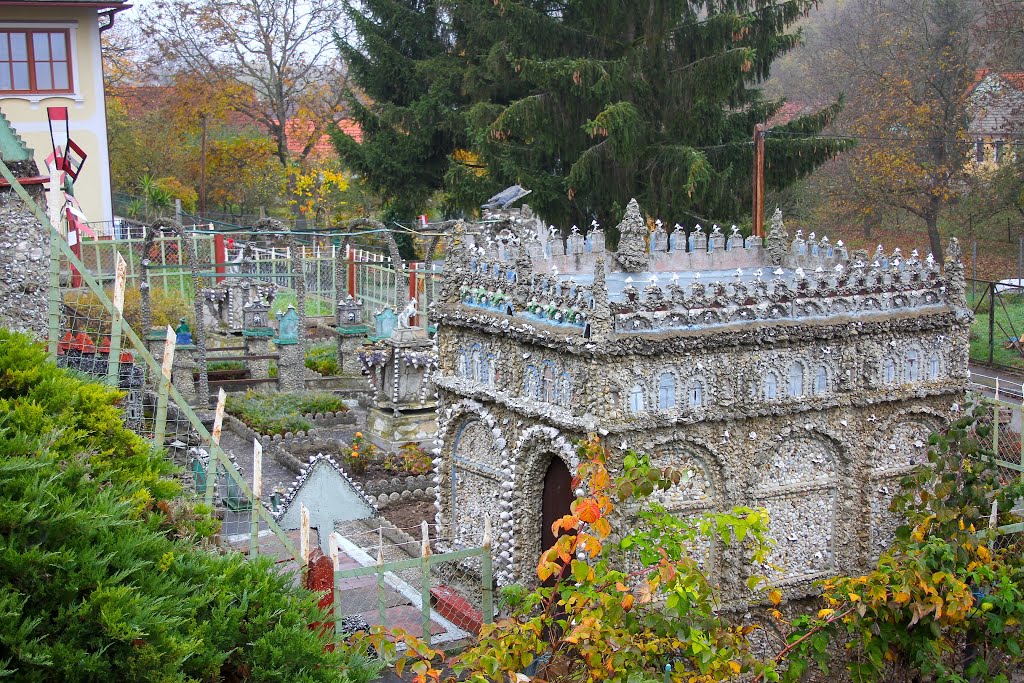 Herbert Reigner (1932-2009), an inhabitant of this community, in the 1950s began transforming the garden around his house into an art environment, starting with the construction of a garden fence made from old tires from wine barrels.

Then he added various decorative elements, such as arches which cover the garden beds and constructed various items along one of the long sides of the garden, such as a windmill, small decorative houses, replica's of castles and nains.

He decorated the various creations with shells, leftovers from a factory which only used the mother of pearl of the shells. To my knowledge, there is just one such a factory in Austria, the Rainer Mattejka firm in the community of Felling, near the national park Thayatal.

Above pictures show that the site partly has retained its function as a vegetable and botanical garden. 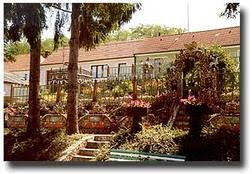 The garden gets its very special own character by a singular architecture which was created in 1961, a structure named the Lusthaus (fun house). 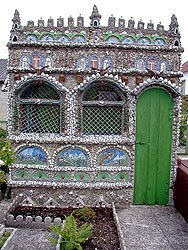 It is a rather massive grey stone structure, with just a few windows, lavishly decorated and equipped with small battlements at the top, more a castle-like structure than a pavilion where one sips a cup of tea in summer....

Since the internet hardly has any relevant information about this site, I couldn't find any data with regard to the ideas behind this specific building. 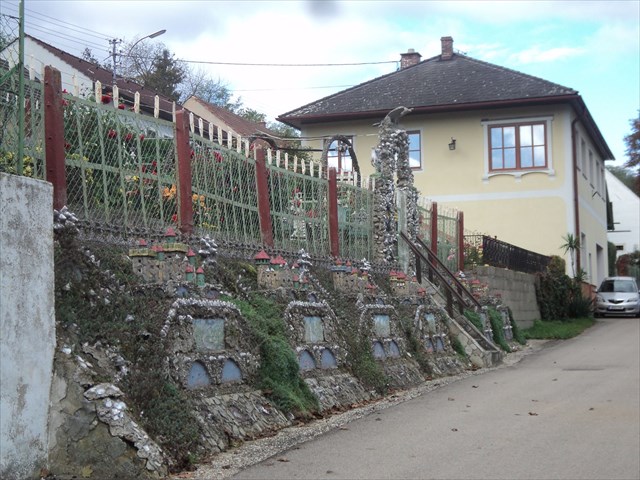 this picture and the next one from the geocaching website

The garden can be seen from the street. It got some publicity in websites of Austrian tourist boards and in the past it could be visited on appointment. 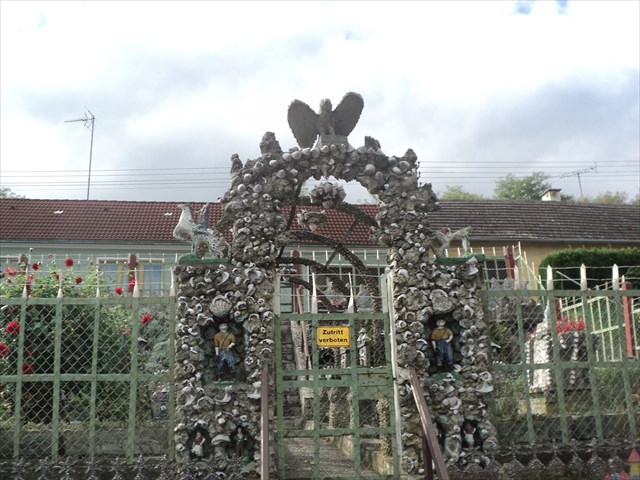 Herbert Reigner passed away in 2009. After his wife died in 2017, a member of the family took care of the maintenance of the site.

However, weather conditions have affected the decorations of the Muschelgarten and the maintenance work is heavy, which in time threatens the garden's survival.

Currently (2020) the site still can be observed from the outside, but because of safety visitors are not allowed to enter it. 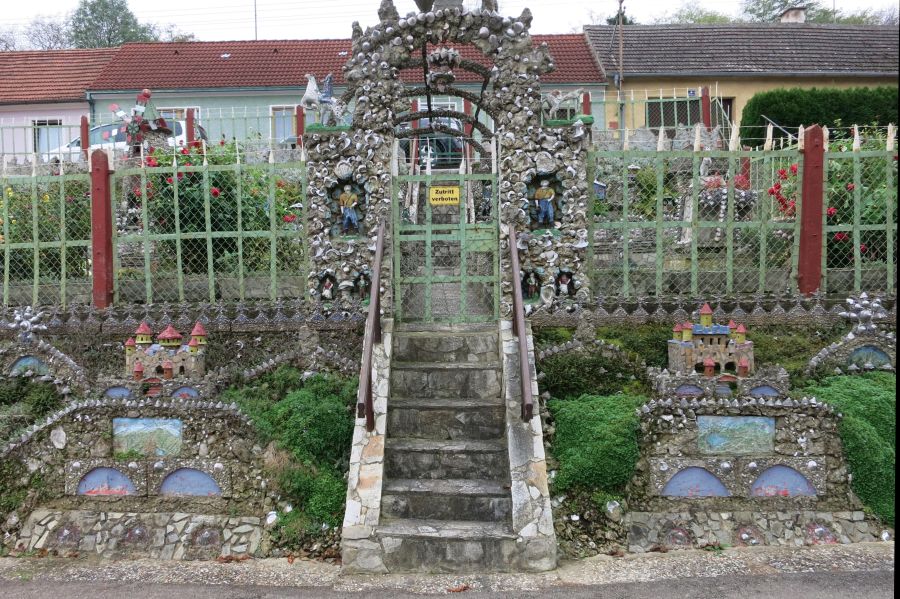 the garden in 2014
picture from website Weinviertelnet
(not available anymore)

PS
Near the Muschelgarten, located at Berggasse 11, there is a Raritäten Privatmuseum  (a private museum of oddities), with all kinds of utensils, clothing, means of transport, etc. from earlier years.
Visitors of the museum will experience that its manager is happy to provide information about the Muschelgarten

Herbert Reigner
Muschelgarten
Berggasse 7
3743 Röschitz, Austria
can be observed from the outside, no entrance