Gabriel Albert's art environment in Nantillé, a garden with hundreds of sculptures, is one of the classics in France.

Already as a young boy Gabriel Albert (1904-2000), who created this site, wanted to be a sculptor. But, as it can be in life, reality was different and he had to earn his living as a manual worker, eventually being a carpenter.

Finally, when retired at age 65 Albert could give way to his passion and he began making sculptures, using the technique of adding layers of cement on an iron frame. All his works were displayed in the garden around his house in Nantillé, a community in the department Charente Maritime in south-west France.

For some twenty years, until 1989, Albert continued making sculptures, all together some 420 creations. He depicted men and women, political personalities, famous people, angels and so on. 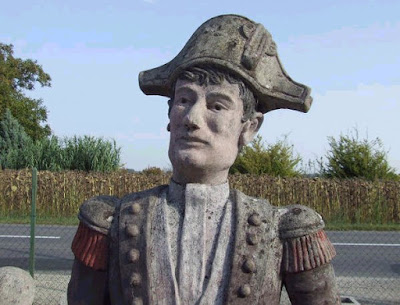 Before he died Gabriel Albert sold the whole collection for a symbolic amount to the community of Nantillé.

The site has been saved for the future

Eventually, in March 2012 a regional journal announced that the site in various ways would get a protected status: on the departmental level it was added to the list of Monuments Historiques, the sculptures were added to a national list and finally the site was added to a national list of historical monuments. In this way, depending upon further plans and decision-making, it would become possible to allocate money to maintain the site.


Renovation of the sculptures

In September 2017 it has been reported that, thanks to the financial participation of the Nouvelle-Aquitaine region, the sculptures will be be refurbished. The cracks will be filled, the mosses and mushrooms removed and a layer of wax will be applied to protect the sculptures.

The third video in the documentation gives an impression of the works, which meanwhile have been completed.

The garden is not open to the public on a regular basis, although occasionally visits are possible, for example on some days in summer or during the Journée des Jardins when many (private) gardens in France are open for the general public (around end may, early june).

But one can also see the garden from the road.

Documentation
* Official inventory of the works of Gabriel Albert
* A series of pictures by Apolline Lepetit on Facebook
* Weblog of Bernard Maingot with many interesting photographs of an Open Day on June 1, 2008.
* Article on Wikiwand
* A variety of pictures on the website Habitants-Paysagistes (Musée LAM)
* Entry on the website of SPACES

* Video by région Nouvelle-Aquitaine (9'22", YouTube, October 2018) about the renovation of the sculptures

first published December 2008, last revised August 2021
Gabriel Albert
Le jardin sculpté
Hameau de "Chez Audebert"
17770 Nantillé, dept Charente-Maritime, region Nouvelle Aquitaine, France
only occasionally open for visits,
but can be seen from the road
in 2020 the site will be open on Tuesdays and Thursdays,
10-12 and 14.30-17.30 (until August 27)
Posted by henk van es at 6:51 PM