Martial Besse (1921), from the community of Bournel in France was a farmer, who also worked as a hairdresser and as a barman.

In 1952 he began decorating his garden with sculptures, using wood and cement. He depicted women, totems and all kind of animals. Many of his creations had a connotation of submission, menace and (occasionally humorist) sexual fantasy. 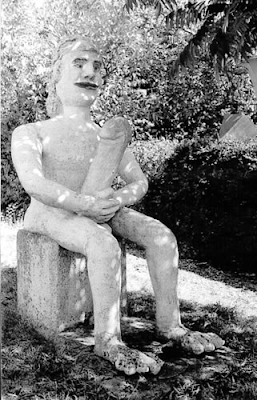 In 2004, due to his age, Besse had to move to another home and his house and garden were sold. Although he had arranged with the buyer that the sculptures would be maintained, as far as I understand there has been another sale and the next buyer demolished the garden.


Martial Besse himself may have got the opportunity to save just a small number of his creations, but their whereabouts remain unknown.

The name of the site

Neither do I know for sure if Martial Besse himself used the name Jardin des supplices. French art critic Jeanine Rivais uses it, but French writer Bruno Montpied in his Éloge des jardins anarchiques, just refers to "the garden".
In an article in Zon'art 4 ¹ Jean-Francois Maurice has described the garden and noted its dark and subversive connotations, naming it a Black Garden of Eden. Laurent Danchin in Raw Vision 41 (2002/3) denotes the garden as Paradis Noir (Black Paradise).

* Article by Jean-François Maurice in Gazogène
* Article by Jeanine Rivais in Bulletin de l'association les amis de François Ozenda, nr 66, jan 2000
* Article in the weblog of Sophie Lepetit, April 2012, with a series of pictures by Raymon Loewenthal
* Entry on SPACES website, with pictures by Jeanine Rivais
* Website Habitants-paysagistes (by Lille Art Museum from March 2018 on) has a series of pictures by Francis David (1991) and documentary panels by André Escard (1984-2008)