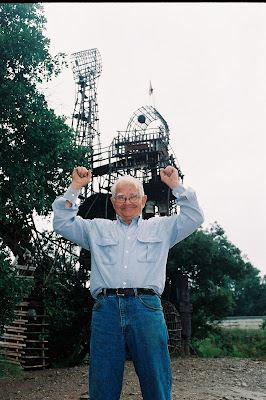 this, and the next picture (sept 2011)
courtesy of Rafa Castells

Josep Pujiula i Vila (1937-2016), a textile worker, around 1980 began creating a labyrinthic landscape on a plot of land in a curve of the river Fluvià in Catalonia, Spain, near the village of Argelaguer.

He made cabins, towers, bridges, walkways, using the trees and all the natural material in situ, knitting twigs into mazes and connecting wooden poles and planks with nails and ropes. 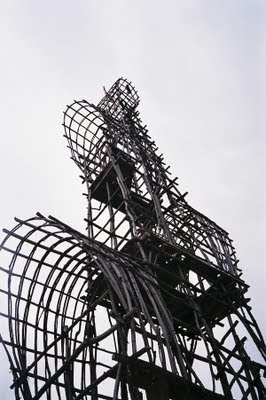 Until his death in 2016 he continued to build his art environment which would become one of the most impressive in the world.

The labyrinth he constructed became a favorite spot for a daytrip by families with kids.

The plot of land, however, was not his property. The authorities had doubts about the safety of the visitors of the labyrinth and they also wanted to use the plot for a better layout of a main road. So, in 2002 Pujiula agreed to dismantle the site and the autostrada A26 had its planned route. 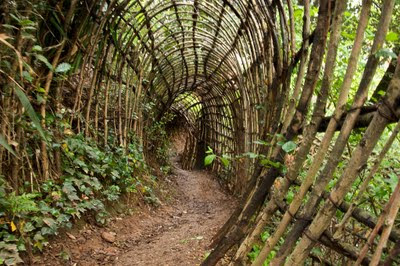 Pujiula made a decision not many people in a comparable situation, would make. He began again. On another spot, not far from the original one, he once more constructed a labyrinth. 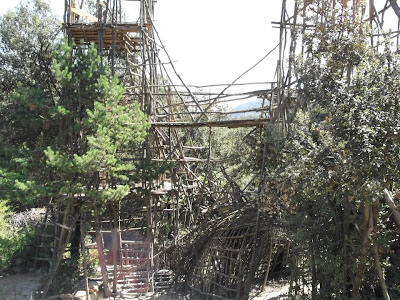 And once more it became a wonderful construction, a creation that reached its full size in 2001 with 7 towers, all about 30 meters high, spread over a length of some one and a half kilometers, a labyrinthic complex with points of view and ongoing tunnels. 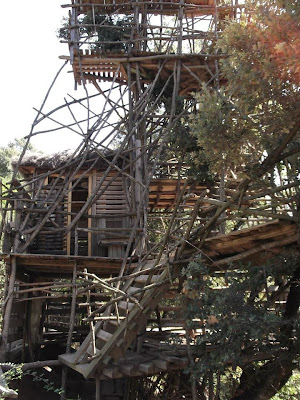 It became a fantastic art environment, a tribute to creativity and a monument to perseverance, but also a non-Disney wonderland, nice to visit with kids, provided you had the stamina to complete the circuit and find an exit.

Wooden structures of the site dismantled in 2012

However, spring 2012 the authorities and the owner of the land made the decision that the wooden structures of the Labyrinth should be dismantled, because their stability could not be guaranteed, the constructions could be dangerous in case of fire and they had been constructed without any permit.

Pujiula, meanwhile in his seventies, dismantled some highrising structures and burned the wooden parts,

However the site also has other, more near the ground creative structures (ponds, sculptures), and in march 2013 an international petition was initiated to convince the authorities that these -and what was still left of the wooden structures- should be saved for the future and Pujiula should not be hindered in developing the site.

On april 3, 2013 the Agència Catalan de l'Aigua (the water authority in Catalonia) ordered that the remaining constructions should be dismantled too, in order that the banks of the river would return to their original state.

Inhabitants of Argalaguer and other parties issued a manifest (May 13, 2013) to prevent this demolition, arguing that the site constitutes "an architectural, cultural and social heritage with a great beauty and sentimental value" (read the full text in OEE-texts). Argelaguer's community council unanimously decided to agree with the action to save the site.

In Pujiula's honor and to document his labyrinth Solanum Films made a movie, which was presented to the inhabitants of Argalaguer in the summer of 2013.

Further developments of the site

Late 2013/early 2014 Pujiula constructed a wooden tower provided with a dome and with several corridors of arched branches leading to the tower.

The art environment was enlarged with a part that is named the Poblat Salvatge (Wild Village), which for example also has the sculpture pictured below. 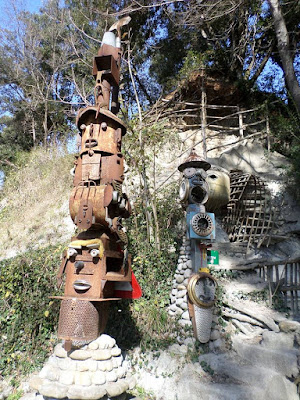 Pujiula also began cutting out a nearby rock formation with chisel and hammer, creating rooms, tunnels and windows. 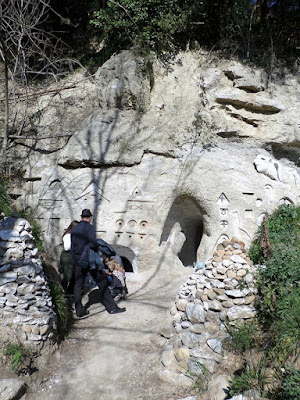 One part of this rocky area is the Tomba Faraonica (Pharaonic Grave). 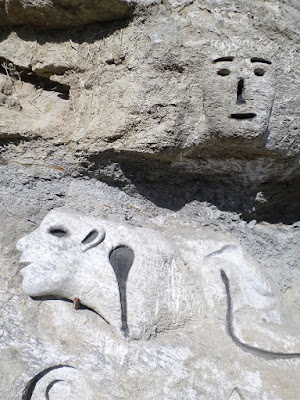 As the pictures demonstrate Pujiula started making sculptures in the rocks, which he embellished with sculpted faces and other characters. 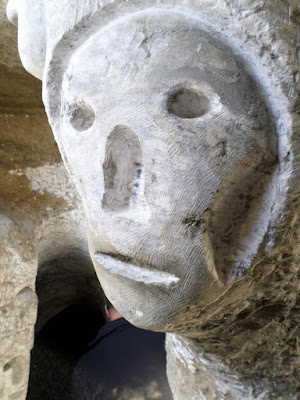 Site classified as a local heritage

In October 16, 2014 the regional government of the province where Argalaguer is located unanimously decided that Pujiula's site is a local heritage (a Bé Cultural de Interès Local). This means that this art environment has a protected status, a wonderful result of the actions of the local population and the international petition !

The Institute for Public Art which propagates knowledge about the practice of public art globally, in 2015 organized a competition for projects from all over the world, the International Award for Public Art.  Pujiula's art environment was one of the five projects from Europe that was nominated and in july 2015 in Auckland, New Zealand, the artist was honored with an award of special distinction.

On June 2, 2016 Josep Pujiula i Vila suddenly passed away because of a heart attack. In the weeks before he died, he had been very busy working on his art environment
Situation late 2021 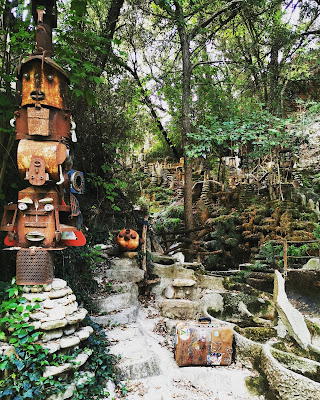 * On the french website Archilibre the story and many pictures of the early developments of this art environment. In 2010 the author revisited the site and shared his impressions (in french, with pictures)
* Juan Antonio Ramirez (Ed), Escultecturas margivagantes: la arquitectura fantástica en España. Madrid (Siruela), 2006. pp 64-69
* Jo Farb Hernandez, "Josep Pujiula i Vila", in: Singular Spaces. From the Eccentric to the Extraordinary in Spanish Art Environments, Seatlle (Raw Vision, SPACES, San José State University), 2013, pp. 540-573. An abridged version on the website of SPACES
* A series of pictures made in May 2018 on weblog Herault Insolite
* Article in french and a variety of pictures (april 2019) on the weblog of Sophie Lepetit
Videos
* Scenes of the site (2014) on the Provincia de Girona (Catalunya) trip video by Serflac (YouTube,
starts at 32.56,  cannot be embedded here)

* The video la Chose (made in 2001 by Bernard Legros and Joseph Pastor, 13'24", published on
YouTube march 2013), shows the Labyrinth as it was up and running (subtitled in french)