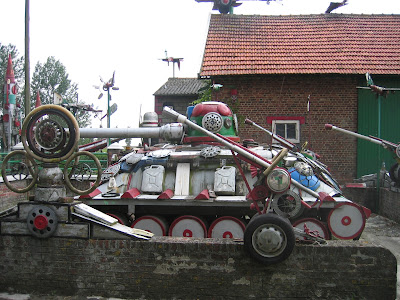 The northern part of France that borders on Flanders in Belgium, historically has many links with that Flemish area: cultural traditions, food and drinks, linguistic influences..... So the name Vanabelle and the name of the community where the site is located, Steenwerck, have a Flemish ring.

Born on a farm near Steenwerck, Arthur Vanabelle (1922-2014) all his life has been living there. He became a farmer, never married and after his parents had died he lived together with his brother on the family farm.

After WWII Vanabelle collected all kinds of (military) objects he traced in the fields around the farm and along the roads in the neighborhood. Having a pile of these materials, at some moment in the 1960's he made a weather-vane.

This inspired him to continue and to construct a model of an airplane, one, another one, and more. He also has made tanks and big guns. He displayed all these creations around the farm and on the roofs of the farm's buildings
. 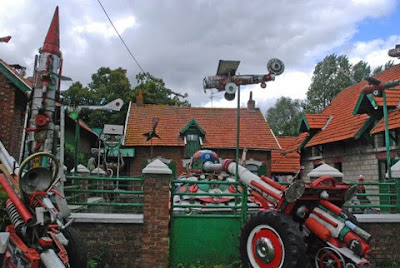 Arthur Vanabelle has been making these constructions for many years, until age 80.

The result is a large collection of "military" objects, displayed on top of and around the farm-houses. The ensemble can be seen when driving the autoroute E42/A25 from Lille to Dunkerque, a road, constructed in the 1970's which runs right past the farm. 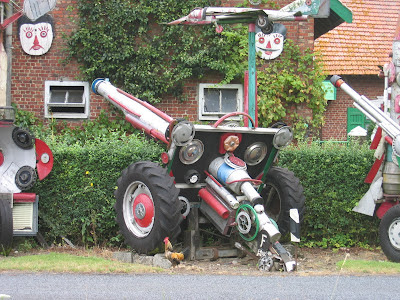 Warfare in the region

Although Vanabelle himself said that he wouldn't know why he made these warlike creations. it can be noted that he himself also liked to talk about what happened around the farm in an early phase of the war in northern France.

In the spring of 1940, when Arthur Vanabelle was 18, in the area where he lived, the German, British and French troops were heavily at war (resulting in the narrow escape of the British troops from Dunkerque).

The farm was in the midst of the movements of all troops and the Vanabelle family housed a lot of people on refuge.

It is quite possible that this events deeply impressed young Vanabelle and that this resulted in his later fascination for military objects. 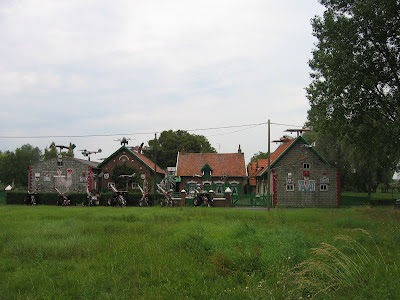 In this context it is interesting to note that Vanabelle's farm is located near a bunker of the Maginot Line, named the Base de la Ménégate. Vanabelle referred to this by adding a placard with this name to the collection.

So it is quite possible that this art environment should be referred to as Base de la Ménégate.

I first learned about this through Alain Cadet's interview (sept 2010), mentioned below. When I wrote the original version of this post (feb 2009), I referred to the site with the name which at that time was used in most French publications, i.e. farm with the airplanes.

In september 2010 Vanabelle was interviewed by french freelance journalist Alain Cadet. The interview is special, because it introduces him talking about his life and works (translation into english published in OEE texts). Asked why he made these creations, Vanabelle said: "Do not ask me why! I do not know! I did it: that's it!".

He also talks about what happened in the area around the farm in the early phases of WWII, warfare activities that, as said, may have influenced him as a young man.

Another aspect of the interview is that Vanabelle says that he was contacted by a museum.

Indeed, the Lille Art Museum in 2010 commissioned a cabinet of architects in Mons-en-Baroeul (Lille region) to make a 1:100 maquette of the site. 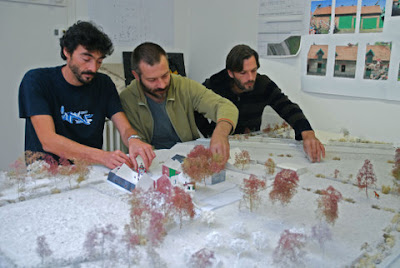 During the summer of 2010 the architects stayed for some days on the farm, measuring, photographing and talking with Vanabelle. They characterize him in this way: "C’est un personnage fantastique qui vit dans la plus totale liberté" (He is a fantastic character, who lives in most complete freedom).

Here is a picture of the completed maquette, currently in the collection of the museum: 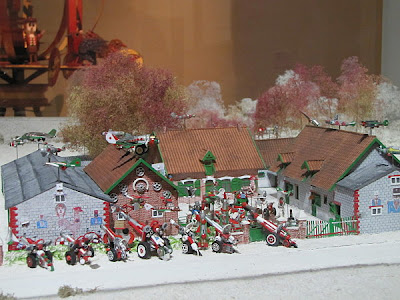 In January 2014 Arthur Vanabelle, together with his brother, moved to a home for the elderly.

A public discussion arose about the future of Vanabelle's art environment. An association was formed to save the site which organized a petition (jan 2014) and a subscription to collectively buy the farm.

After Arthur Vanabelle passed away early september 2014,  in december 2014 the farm was bought by a private party that has transformed the property into a private dwelling. However, the purchase contract provided that the mayor of Steenwerck was allowed to remove a number of creations in favor of a local museum.

In agreement with Arthur Vanabelle's brother, the mayor in the course of 2015 has removed some twenty items. with the idea to add these to the collection of the local Musée de la vie rurale (Museum of rural life) as soon as a planned expansion is ready.

At the beginning of April 2019, it was announced that the financing of such an expansion had been arranged (with contributions from the municipality, the department, the region, the state and the European Union) and that construction had started. The new accommodation is expected to include fifteen works that give a representative picture of Vanabelle's art environment. The opening is expected in April 2020.

Meanwhile the association to save the farm, after offering a memorial stone for Vanabelle's grave, has cancelled it's activities. 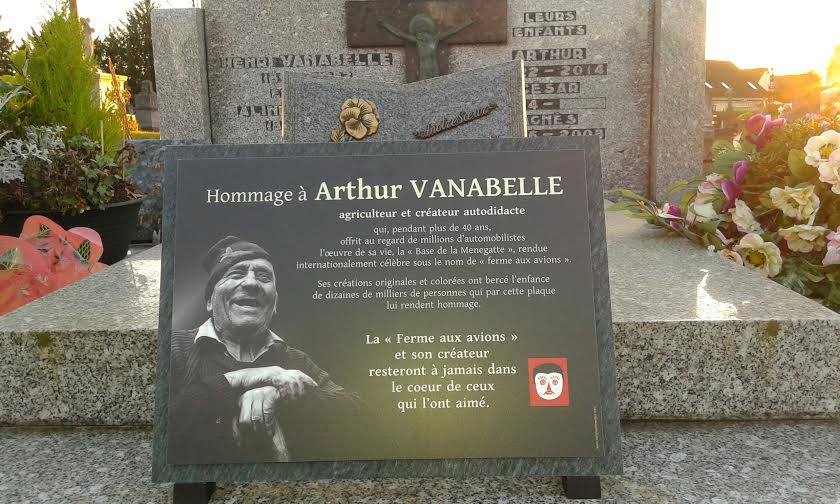 memorial stone offered by the association to save the site

* Article on SPACES website
* l'Inventaire général du patrimoine culturel. Région Hauts-de-France, pictures and description
* Website Habitants-paysagistes (Lille Art Museum from march 2018 on) has a variety of pictures (by Francis David 1983 and others)
Videos
* Vidéo by french regional TV (You Tube, 1981, 5'26"),