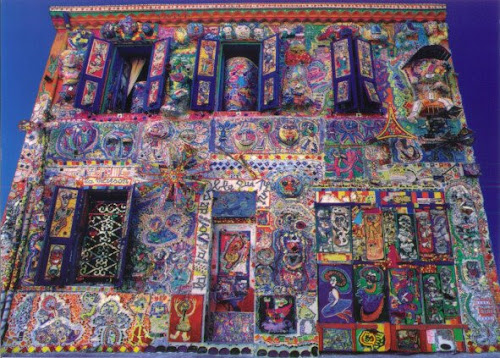 The picture above shows the facade of a house in the neighbourhood of Pont l´Étoile in the community of Rocquevaire in the south of France. This Maison de celle qui paint (the house of she-who-paints), fully decorated by its inhabitant Danielle Jacqui, has become a famous creation in the field of art environments, well known both inside and outside France.

Born in 1934 in Nice, Danielle Jacqui at a young age already was attracted to creative activities, but due to personal circumstances she initially couldn't pursue an artistic direction.

Married in 1952, she got divorced in 1970 and then she became a brocanteuse -someone who trades in curiosities. She had a stand on local markets, where she also exposed the paintings she had begun to make.

In the 1970s Jacqui mainly was active in making paintings. Her first exposition was in 1976, in Marseille.

She took some art lessons. In February 2009 she described on her weblog how she entered these art classes in the same way as she went into the world of brocantes: without any preparation or schooling.

Indeed, Danielle Jacqui has her opinion about mainstream art and artists.

It is not surprising that she felt more at home with those artists in the south of France who united under the banner of art singulier. Danielle Jacqui herself has been rather active in bringing them together, for example by taking the lead in organizing from 1990 on festivals of art singulier in her home town Roquevaire.

This festival would develop into a biennial in Aubagne, famous for many years: the Festival d'art singulier. When in 2014 the local authorities ordered the removal of some artworks they considered pornographic, the festival was canceled. In 2015 it returned to Roquevaire.

The decorated house in Roquevaire

In 1982, after she had visited Robert Tatin's art environment La Maison des Champs, a site near Laval in France, she began decorating the facade and the interior of her house in Roquevaire, where she lived since 1961. 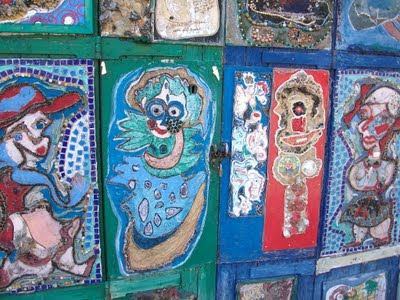 This became a passionate project in the 1980s. Exterior and interior of the house have been completely decorated in bright colors.

The interior has a colorful collection of artistic dolls and all walls, ceilings and staircases have been decorated with mosaics, paintings and inscriptions.


The facade of the house has been redecorated a number of times. The picture below shows the facade as it was in november 2015. In 2016 Danielle Jacqui -at age 82- for the fourth time repainted it.

From 2006 on Danielle Jacqui has been active in an extensive project in Aubagne: the Colossal d' art brut ORGANuGAMME, a project scheduled to be completed in 2016.


Originally meant to transform the facade of the Aubagne train station into an international artistic attraction by decorating it completely with all kind of brightly colored ceramics, sculptures of some twelve meters high included, in the course of 2014/2015 a start has been made to assemble the parts of the artwork along a roundabout that marks the eastern entrance of the town. 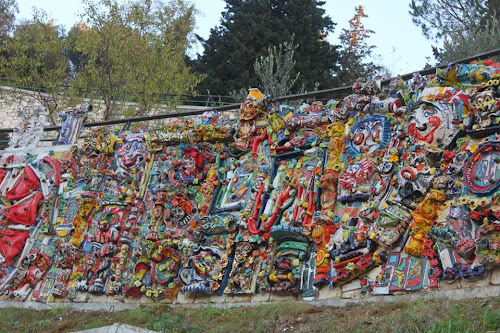 However, after local elections in 2014 a new political climate reigned and the new authorities of Aubagne showed themselves no longer interested in this artwork. Work on the project was halted and although some parts of the work are still present on the roundabout, in the meantime these have been almost overgrown by the present vegetation.

Meanwhile the Swiss community of Renens, not far from Lausanne, expressed it's interest in the creation and proposed to install (a large part of) the Colossal d'Art Brut on the premises of the Ferme de Tilleuls, a 17th century estate bought in 2008 by the community with the idea to transform it into a museum.
Early 2016 a large number of ceramics was relocated to Renens.
In September 2020 a start was made with the permanent exhibition of these ceramics at the museum.
As the photo above shows, a high scaffold of braided iron wire has been placed on the grounds of the museum. On September 26, 2020 this first part of the Colossal d'Art Brut ORGANuGAMME II, filled with a selection of ceramics, was inaugurated.
The idea was to set up a number of such decorated pylons in order to encompass all creations.  In the spring and the summer of 2021 more pylons have been decorated, resulting in a dccorated structure as can be seen in the picture below.
Eventually the Colossal d'Art Brut ORGANuGAMME has been scattered over a variety of places.
In Switzerland apart from the large collection on the premises of the museum in Renens, the Collection de l'art brut in Lausanne also has a number of creations.
Parts are still in Aubagne, at the roundabout and in the ambulatory of the Observance monastery.
In Draguignan there is a fresco combined with a large sculpture by  Emmanuelle Not exposed in the inner courtyard of the Town Hall.
There are parts in the Musée Anatole Jakovsky in Nice,  in Roquevaire, Danielle Jacqui's hometown and in Montpellier at the Musée d'art brut.
Some parts will go to the Musée des Arts Modestes, in Sète, France.
The ORGANuGAMMusEum Danielle Jacqui

And then some parts of the Colossal d'Art Brut ORGANuGAMME have been included in a new museum entirely dedicated to the work of Danielle Jacqui. It is housed in the ancient Chapelle Saint-Sauveur in the community of Draguignan in southern France, a building in Romanesque style, especially made available for this purpose by the municipality.

This ORGANuGAMMusEum Danielle Jacqui, that comprises around 150 works dating from 1970 to the present, was inaugurated on July 4, 2019. 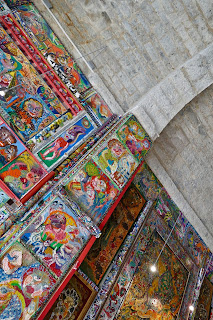 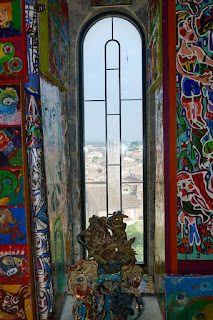 As the photo of the chapel shows, the building has high walls. All interior walls are up to the ceiling and seamlessly covered with creations, as also is the case in the Danielle Jacqui's house. It is not out of place to state that the interior of the chapel has been transformed into an art environment.
Documentation
* Danielle Jacqui's FB page
* Michèle Perez, "La Maison de Celle Qui Paint and the Colossal d'Art Brut", in: Raw Vision 73 (Fall/Autumn 2011)
*The weblog of Sophie Lepetit has the story, both of the Aubagne project and of the exterior and the interior of the house in Pont l´Étoile, see posts of 10/9/2011, 11/9/2011, 12/9/2011 and 13/9/2011 (in french, but lots of pictures); see also her post of 9/25/2014 (pics of the interior)
* Article on SPACES website
* RobertaTrapani, "Danielle Jacqui e la casa della meraviglie" (Danielle Jacqui and the house of wonders), in: Rivista Outsider Art nr 18 (autumn 2018), pp 78-91)

Danielle Jacqui
La Maison de Celle-Qui-Peint
Pont de l'Etoile
13360 Roquevaire, dept Bouches du Rhône, region Provence-Alpes-Côte d'Azur, France
facade of the house can be seen from the street
the Colossal d'Art Brut can be seen in Renens, Switzerland
a museum with Danielle Jacqui's works, the Chapelle Saint-Sauveur can be visited in Draguignan
Posted by henk van es at 12:36 PM