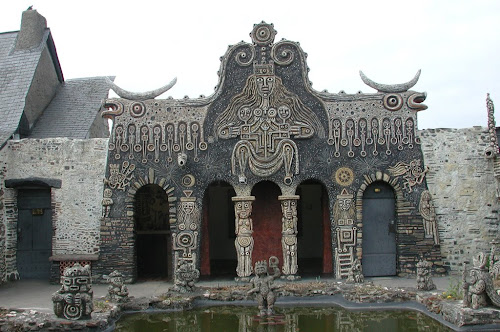 pictures courtesy of Laurent Jacquy except the last one

Currently usually referred to as Musée Robert Tatin, this singular architecture ranks among the important art environments in France ¹.

A man of various professions, Robert Tatin (1902-1983) was active as a ceramist, a carpenter, a mason, a decorator, a painter, just to mention some of his jobs. From childhood on he was quite interested in art. Born in the Normand city of Laval, at age 16 he left for Paris where he worked as a decorator and followed art classes at the École des beaux arts.

After he had been conscripted in the military (1922/24), Tatin returned to Laval where around 1930 he began a construction company. In this job he also could express his artistic interests.

After World War II Tatin decided to go for an artistic career, so he once more moved to Paris. He began a ceramics studio and participated in the artistic circles that re-inspired postwar cultural life in France.

In 1950, however, he decided to go to Brazil, where he was active in making art and consulting musea. He made distant travels through South America, a far as Tierra del Fuego and he was deeply influenced by the indigenous culture.

At age sixty, in 1962, he bought an old house in a community known as La Frénouse, located in the vicinity of Laval ². Here, for the next 21 years, together with his wife Lise, he would create an art environment. 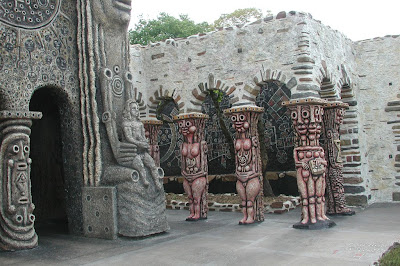 The site includes a collection of totem-like statues and a temple-like main building, the museum as such.
The road of entrance, some 80 meters long, is lined up with 19 statues of colored concrete, some of these 2.5 m high, which represent personalities such as Jeanne d'Arc and Vercingétorix. 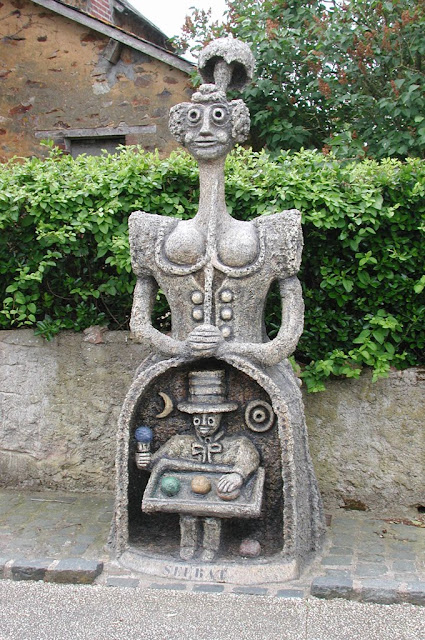 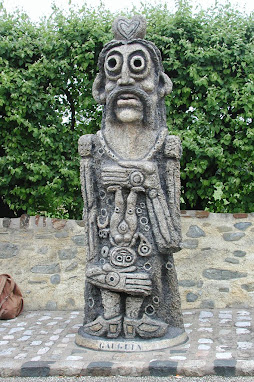 statues along the entrance road

One enters the court-yard of the museum via the mouth of an enormous dragon. The walls of the building have been decorated extensively. There is a Gate of the Giants, impersonating Rembrandt, van Gogh, Leonardo da Vinci, Goya and Delacroix.

The museum itself -like the original house- is oriented east-west and it includes a lot of symbolism (garden of meditation, rising sun in the east, moon at night in the west, a 6.5 m high statue of the Lady of All the World).

In 1969 the site opened as a museum that could be visited by the public, and in 2002 the site was recognized as an official Musée de France, which is open all year (guided tours only).

The house where the Tatin couple lived can be visited too.

After Tatin passed away (1983), he was buried in the garden around the original house. 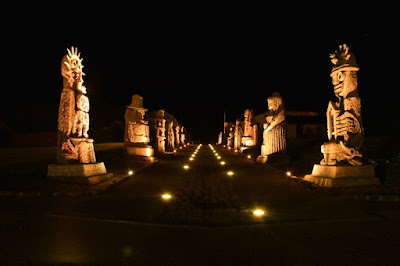 In May 2019, the museum's 50th anniversary was celebrated with an opening in the evening in the context of the European night of museums, during which the museum was festively illuminated and fireworks were lit.

Documentation
* Website of the museum
* The museum on the Mayenne touristic website
* On Flickr a large series of pictures by Coalville2011 (includes video of Tatin at work)
* Article (February 2020) by Jessica Straus on her weblog Quirk, with a variety of photos

¹ This blog mainly deals with art environments made by self-taught artists. In terms of visual art and techniques of constructing Tatin cannot be considered as a non-professional, in architecture he probably was an outsider. In France his creation in general is regarded as a creation outside of the world of mainstream art. Tatin has inspired some self-taught artists who made art environments, such as Jacques Lucas and Danielle Jacqui.


² Laval houses a museum of naïve art that features Henri Rousseau and has a collection of art singulier. The city is the birthplace of Alfred Jarry (1873-1907) who founded 'pataphysics.