Charles and Pauline Billy, Le jardin de nous deux/The garden of the two of us

Just as the Palais Ideal, the Jardin de nous deux is not far from the city of Lyon in France (in fact it is 20 km NW of it). The site, in Civrieux d´Azergues, was created by Charles Billy (1909-1991), with a lot of assistance by his wife Pauline.

Charles and Pauline Billy liked to travel around and visit famous buildings all over Europe. When in 1975 Billy retired from his job as a corset maker, he wanted to decorate the garden around the house in Civrieux the couple had acquired some time before. In 1968 he had visited the Palais Idéal and probably he was impressed by what he had seen and wanted to make some creation like Cheval had done.

The garden behind the house was situated on a slope with a difference in height of some 15 meters (49 ft), so before he actually could start building and decorating, he had to make horizontal platforms. As far as I understand some seven of these terraces have been laid, most of these provided with ponds, that are interconnected with a water supply.

On these terraces Billy constructed replicas of world famous architectural showpieces, like the Tower of Pisa, the Arc de Triomphe in Paris, Venetian Palaces, etc. The constructions are a couple of  meters high, none higher than 3 meters (9.8 ft), but I do not know if they are on scale or not.


The stones he used came from demolished buildings in the area and most constructions have the typical yellow-brown color that is characteristic of stones from the Beaujolais area. Many of these stones had to be cut into smaller units in order to obtain proportionality.

Many items have been decorated with smaller sculptures which appear in high relief, such as the postman on next picture who indicates the mailbox at the entrance of the property.


The construction of the platforms and the making of the various replicas must have required a tremendous physical effort. It is without doubt that Pauline Billy actually has collaborated in creating the site and the name garden of the two of us really reflects the involvement of the two of them. 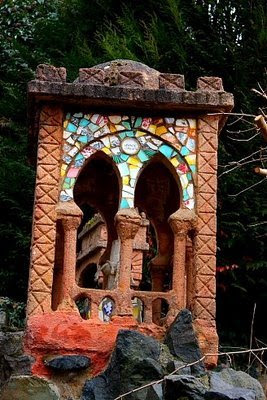 The Billys have been working on this project for some fifteen years and the site has become quite a wonderful scene.

Charles died in 1991 and Pauline in 2002. The couple had decided to legate the property to the Regional Council of the Rhône department. The department's cultural authority (DRAC), however, doubting the artistic and technical quality of the site, advised negatively and the council decided to reject the legacy.

Currently the site is a private affair. The present owner as far as possible takes care of the artworks. The garden however is not open to the public (except at very special occasions, like a Journée de Patrimoine). So it has not become a touristic spot and I will refrain from giving its full address.

Documentation
* For a long time the internet had no evaluative reports of the site, just a number of short notes, mainly with the same, rather global information.
* Good news however: the weblog of Sophie Lepetit (june 2012) has three posts with the story and pictures of all relevant aspects of Billy's creative work, take a look here, here and here.

Acknowledgement
* In the revised version of this post (October 2011) I have inserted some factual data derived from the chapter about the Billy couple in the book (2011) by Bruno Montpied Éloge des jardins anarchiques. In the next revision (June 2012) I inserted the refusal of the legacy as related on Laurent Danchin's biography of Charles Billy, as published in Sophie Lepetit's weblog (June 2012)