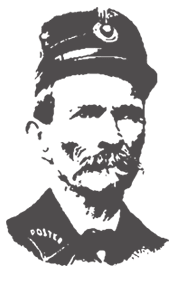 The Palais Idéal is among the best known art environments in the world. It is quite possible this creation inspired other outsiders (in France and elsewhere) to make their creations and it is quite sure that it aroused the interest of mainstream artists and writers (like André Breton, who discovered the Palais in 1931).

Born in 1836 in a small village near Hauterives, Joseph Ferdinand Cheval lost his mother when he was 11 and his father when he was 18. He just had some years of primary education and did not have to be in a military service, possibly because of his small size.

In 1867 Cheval exchanged the baker's trade for a job at the French national post service, first working in places outside of Hauterives.

In 1873 his wife Rosalie died. In 1878 Cheval was stationed in Hauterives as post deliverer, distributing the post to the inhabitants of his district, making a daily walk of 32 kilometers. In the same year he met Claire-Philomène Richaud to whom he got married for the second time.

The story has been told many times: in 1879, on an April day, doing his 32 km Cheval stumbled upon a rock, was surprised by its form and got the idea to realise the dream he sometimes had during his post distributing tours: to create a beautiful building.

Starting in 1879, when in his early forties, Cheval continued this creative activity for 33 years, working all by himself, often in the evening or in the night, just using simple utensils.

During the first twenty years, his project only became known to the local residents, who probably viewed Cheval's activities with some surprise. Only after those years, in the beginning of the new century, his activities became more widely known, with in 1905 a first article in the national magazine La Vie Illustrée.

The rise of photography was also of importance, in particular the arrival of the phenomenon of the picture post cards


In 1902 Cheval agreed with a proposal of a photographer to make picture postcards of the Palais Idéal as it was in the making. A few years later he would acquire the rights to the sale of these postcards, just as illustrated magazines a very important visual communication medium of the early 20th century. Cheval can often be seen posing on these picture postcards,

The eastern facade of the Palais includes an Egyptian monument and a Hindu temple and there are three rising sculptures depicting Caesar, Vercingetorix and Archimedes.

The western facade has -separated by pillars- a number of niches in which there are miniature monuments from various cultures, it also has some balustrades accessible via staircases, and there is a replica of a mosque.

The northern and southern side of the Palais have terraces, columns and all kinds of structures that somehow refer to a variety of cultures and civilizations.

Cheval made his own tomb

Cheval had indicated that he wanted to be buried in his Palais, but the authorities would not allow this. So, starting in 1914, on the local cemetery he also constructed a tomb, which took him some eight years to complete.

He has been buried there after he died in 1924.

In the 1930s Cheval's creation was discovered and discussed with admiration by artists such as Andre Breton and Picasso.

But it took some time before official France acknowledged the importance of Cheval´s achievement. However, despite strong opposition, in 1969 France's Culture Minister formally declared that the site was a Monument Historique, which also implied it got a protected status.


It took some more time before the French national Postal Service did honor facteur Cheval, but in 1984 a stamp with his image was issued and in 2007 an exposition in the national Musée de la Poste in Paris was organised that featured him an his creation.


Owned by the city of Hauterives since 1994, the site attracts over a 100.000 visitors a year. It can be visited (almost) daily the year round. 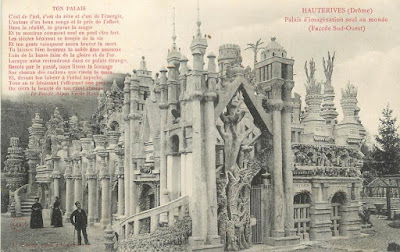 Documentation
Since the internet has a lot of information about the Palais Idéal, this documentation just includes the sources I especially like:
* The official website of the Palais Idéal
* Website by Kristin Fiore, in English, with biography, lots of pictures and additional information about art environments
* Article on SPACES website, with some photo's made in 1988 by Seymour Rosen and other photo's (2008) by Pavel Konečný

* The site appears  in Jarvis Cocker's Journeys into the Outside (1999, on YouTube in 2012, see my post of august 23, 2012)
* Website Habitants-paysagistes (by Lille Art Museum from march 2018 on) with a large variety of photographs (1990) by Francis David and documentary panels (1984-2001) by André Escard
* On the website Google Art and Culture a contribution (2021) about the Palais Idéal with a large amount of photos and informative material, such as a reproduction of Cheval's last interview (1919) and an illustrated collection of the quotes that appear on the building.
Video
* A video (uploaded January 2010 to You Tube), made by the Moscow Museum of Outsider Art (Russian spoken).