Shells and pebbles are among the materials used by people who create art environments. England has a number of shell decorated sites. In that country shells are also favourite as decoration in follies, singular architecture rich people from around 1700 on would commission to be constructed on their estates.

This weblog is not about follies or about mysterious places in Europe. It is about artistic creations made by non-professional artists. The Margate Shell Grotto for sure is an artistic creation, but who created it? 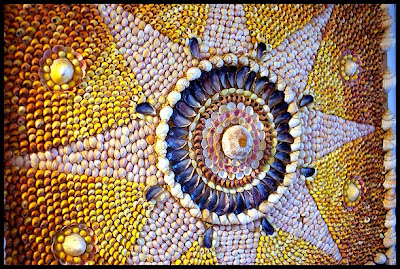 The site has underground passages and rooms, it has a large dome, and all walls are decorated with shell mosaic, altogether some 190 m², 4.6 million shells.

Some say it is a folly. However, the land where the site is situated never was part of an estate. Before 1835 when the grotto was discovered by accident, nobody knew about its existence, which also is an argument, because follies -and their owners- are meant to be admired and talked about.

An interesting theory about the history of the grotto was presented by the late Mick Twyman, who was related to the Margate Historical Society. He measured the lay out of the decorations in the dome in relation with the passage of the sunbeams that enter the dome through the small circular opening in its top, which made him conclude there was equinox-compatibility around 1141 (if this is abracadabra to you, here is an explanation of the precession of the equinox).

This might be an indication of the time the grotto was decorated. The patterns in the mosaic made Twyman suppose this site was a hide-out or temple of the Knights Templar. 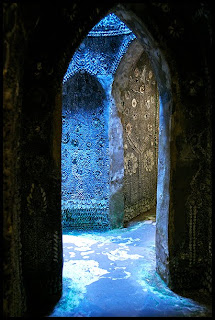 The link to Twyman's article is no longer available on the official website of the Shell Grotto (and it is not available elsewhere too) since the management of the Grotto prefers not to take sides with regard to the various theories about the Grotto's origin and adheres to "we do not know".

Theorizing about the grotto's origin goes on. Take a look at an article by Megan Manson (April 2014) on the Patheos.com website.

Preservation of the grotto

The Grotto is classified and British Heritage has co-financed a conservation project. The first phase began in 2009 and focused upon preventing that rain water would penetrate the soil above the grotto and damage the decorations.The next phase started autumn 2011 and included repairs and cleaning of the shell mosaics.

Not far from the Shell Grotto, there is another grotto, called Margate Cave. This one, however, since 2006 is closed for the public because of safety problems. The history of this cave is also rather mysterious and curious. The future of this cave as a touristic site is uncertain, because of a plan to build a housing complex close to it.