Maybe you did not recognize immediately the scene depicted in above picture, but this is a replica of the Terrace of Lions along the Sacred Way on the isle of Delos, the famous Greek former sanctuary and currently important archaeological site, just in the center of the Cyclades Archipelago in Greece.

This replica was made by self-taught sculptor Benetos Skiadas (b.1944), who lives on the Greek isle of Paros.

Born on Paros, Benetos Skiadas at age eleven began working in the fishery and after he had various other jobs he became a fisherman by profession, sailing for many years seas far away from his home.

Throughout his life he was interested in making replicas, like he has been making a number of beautiful models of ships, as in next picture. 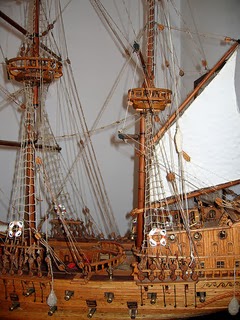 When he had worked in the fishery for many years, Benetos Skiadas re-settled on Paros and around 1990 he succeeded in realizing his dream: a creative project to promote and maintain the Cycladic tradition.

Part of this project includes making replicas of monuments and other structures that represent that tradition, such as the above Lions Gallery.

The visitor of the open air museum will see replicas of the Andros lighthouse, the ancient theater of Milos, the basilica of Tinos, the monastery of Amorgos, a typical Cycladic windmill, and so on.

Alongside the exhibition at the outside of replicas of famous built structures, there is an inside exhibition of ship models and other pieces of folklore art of the Cyclades.

Skiadas regularly made new replicas, such as the harbor café at Parikia, the main town of Paros. If ever as a tourist you departed  from Paros, you may have been sitting on the cafe's terrace, awaiting the arrival of the ferry.

Sweet memories, the café in this version no longer exists

Skiada's most recent creation, finished early 2014, is a replica of the Panagia Ekatontapiliani. 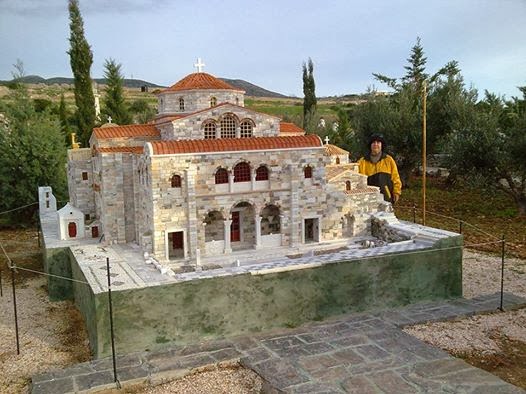 This Church with a hundred doors, located in lower Parikia, not far from the harbor, is one of the oldest christian churches in Greece, it's origins dating from the fourth century.

Above picture (August 2012, courtesy TripAdvisor) shows the model under construction.

Skiadas has made a wonderful, faithful copy of the building, using pieces of Paros' marble for the walls and argile for the roofs.

From 2014 on this replica can be seen by the public on the grounds of the Folklore Museum.

This replica of the Church wit a hundred doors may be the last addition to Skiadas' oeuvre of replicas, since in the course of 2015 he has decided to stop making new creations, a decision that may have to do with his age and the tragic event that end 2014 his beloved wife died.
Some time after the death of his wife, Benetos Skiadas handed over the management of the museum to his daughter Katerina.
Documentation
* The museum's website (in English and in Greek) relates the artist's life and vision and gives an impression of his creations.
* Pictures (2007-2009) of the items in the museum as published on Flickr
* The museum as presented  on ParosWeb
* Video by Paroshoteliers (April 2012, 2'44", You Tube) scenes from Paros and the Museum