Masgot, a small community in the department Creuse in the south of France, has become famous because of a very special creative talent of one of its former inhabitants.

François Michaud (1810-1890), who all his life lived in Masgot, at some moment manifested himself as a self-taught sculptor.

Not much is known about his life. His father was a mason, Michaud himself a farmer. He married at age 19 and the couple had four children.

From around 1850 until around 1880 Michaud made sculptures in granitic stone which he displayed at various locations throughout the village. In this way the community was transformed into a large scale 19th century art environment with some fifty sculptures depicting all kinds of people and animals. 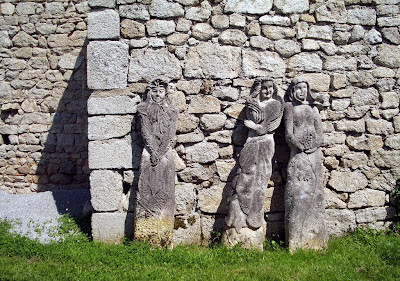 It is quite possible that for many decades the villagers did not consider it special that their village was decorated with such a lot of sculptures, and indeed in the course of the years these creations became neglected and got covered with vegetation.

However in the early 1980's Daniel Delprato, mayor of Fransèches (of which Masgot is part) and also a professor in the crafts of building, remarked the particularity of Michaud's creations and began working with Masgot's inhabitants to clean and if necessary restore the sculptures.

When this resulted  in TV-crews visiting the village and newspapers publishing articles, the inhabitants must have realized the significance of Michaud's work.

So, in 1987 the association Les amis de la Pierre de Masgot was formed. Their website (in french) has a lot of information about Michaud and it presents various ways to discover the sculptures (simple map, audio, illustrated booklet)

Masgot currently has a visitors center where tourists can get information and in summertime various activities are organised, like lectures, guided visits, but also weekly courses in sculpting in stone.

visitors are welcome
Posted by henk van es at 11:31 AM