Cabrières d´Avignon, a small community east of Avignon in the Vaucluse in France, is one of the very picturesque villages in the south of France as it has retained much of its original character.

Leopold Truc (1912-1991), an inhabitant of this community, was a farmer. He had a small cabin where he kept his farmer tools and around 1955 he decorated this cabin with mosaics.

This inspired him to continue this creative activity and he decided to transform his garden into an art environment, which he did by laying out small lanes, making sculptures and small buildings, and adding decorations of (shell) mosaic in geometric patterns. 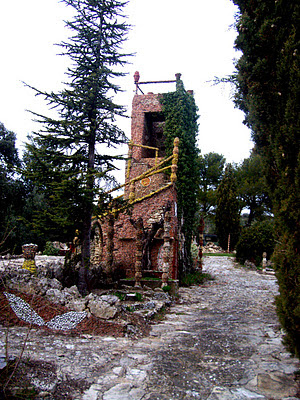 The garden has a single-handedly constructed tower of some 8 m (26 ft) high, which allowed him and eventual visitors to take a look at the beautiful landscape of the Luberon. 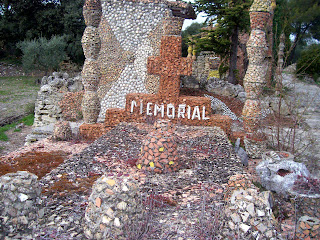 And then, the site also has an ornamented grave, which Truc had made for himself. Eventually he has not been buried here, since French law does not permit this.

Leopold Truc has been embellishing his garden for almost forty years. He died in 1991.

Truc´s project was appreciated by artists living in the south of France, grouped around art singulier, but generally speaking this art environment has been somewhat forgotten.

The site still (partly) exists today, but it is situated on the premises of a private house and is not meant to be visited by the general public.