Dating back from 893, the Confrécourt farm, located near Soissons, in the area just north of the Aisne river, France, was the theatre of violent warfare between French and German troops in september 1914.
Near the farm the frontline between the armies came to stay and the troops for years had to fight a war from the trenches.


In the neighbourhood of the farm, still in ruins today, there are quarries, that during the war would serve as a depository, a hospital, a place for soldiers to rest, for better or worse it was a habitat for the soldiers.


The caves, like other memorabilia from the war in the region, are cared for by a group of volunteers, the Association Soissonnais 14-18.  One of there aims is to make better known and to protect the artworks made by soldiers during the war.

In 2008 this association published a book, Le Graffiti des tranchées, devoted to the many pictorial and sculptural creations in and around the trenches. 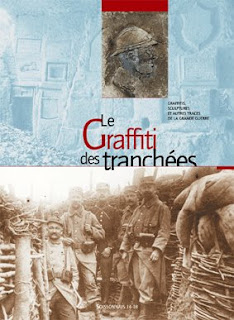 The Confrécourt caves can be visited on appointment with Soissonnais 14-18 (from March-September).

near Soissons, dept Aisne, region Hauts-de-France, France
can be visited on appointment
Posted by henk van es at 9:10 PM