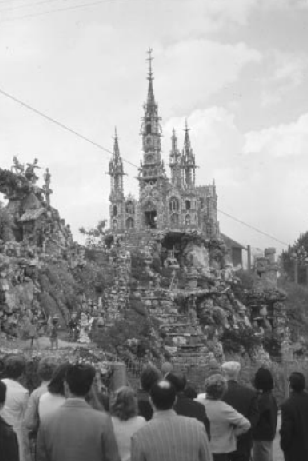 The picture above, made by Bernard Lassus ¹, shows a group of French people, gathering on a Sunday afternoon around 1967 to watch kind of a show presented by Marcel Landreau in his decorated garden in Mantes-la-Jolie, France.

Born in the community of Noirterre in the Deux-Sèvres area in France, Marcel Landreau (1922-1992), after school became a pastry chef. After WWII for some years he stayed in french Indochine (what nowadays is Vietnam), to settle around 1961 in Mantes-la-Jolie, west of Paris. where he had a job at the French railway company as a foreman in shunting freight trains.

In Mantes he acquired a plot of (sloped) land, where he built his house.

At the same time he began making sculptures from pebbles he glued together, often in such a way that parts of the creations could be animated.

He also made structures and constructions to decorate his garden. The most impressive singular architecture was a cathedral he began to construct in 1965 (images above and all the way above). It took  him two years to complete this building, which was so large that a child could fit inside.

A special feature of the garden became a procession of people descending from the cathedral.

Another feature was a scene of people dancing at a wedding party. Probably that's why the garden has been named after the bride. Controlled by wires connected to electric motors the impersonations could make movements

On Sundays, after lunch, the locals liked to gather on the street in front of the garden and watch the life show of people dancing at a wedding on music from a homemade sound system, which also could produce the sound of ringing church bells.

At the end of 1989, when Landreau was approaching his seventies, he wanted to return to the Deux-Sèvres area where he was born. He sold the house and the new owner eventually demolished the site, although he had made other promises ².

For a number of years it was assumed that all of Marcel Landreau's creations had gone.

However, in October 2009 it was announced that a collection of the smaller sculptures had been discovered. As far as I understand Marcel Landreau himself had taken a number of his sculptures
to his new residence..

The recovered items were traced by antique dealers Fred and Cathy Tavard, who as far as I understand, found them at a firm that trades in old construction materials.

notes
¹ The picture by Bernard Lassus is derived from his paper in The Vernacular Garden (1993), a collection of papers of a conference on the history of landscape architecture. Lassus is a well known French writer on landscapes and gardens. His book Jardins imaginaires (1977) was an important factor in the rise of interest in the art environments created by ordinary people and self-taught artists.
² This is the frequently heard version, also supported by Laurent Danchin. However, Bruno Montpied (Le gazouillis des éléphants, 2017. p. 352) says Landreau demolished the site himself