Felicja Curylowa, A decorated house in a decorated village

Zalipie is a small village of about 800 inhabitants in the southeast of Poland. It is known as the painted village, because of the decorations one will find, not just on the interior and exterior of the houses, but also on trees, village pumps, street furniture and other objects in public space.

Kind of a collective art environment?

The tradition seems to have begun at the end of the 19th century. when ovens with chimneys became usual and  it proved worthwhile to make paintings on the walls, which previously were smoke-affected. This story is related on the web page of polish Skanseny.net, the site of a project that documents all open air (ethnographic and folkloric) museums in Poland.

However, making decorations by women as such may have started earlier, in the second part of the 19th century, and (as Alice in her comment remarks) this may have "a lot to do with the political and social freedoms acquired by the villagers post the 1848 upheavals. (Like the right to marry in different county without obtaining permission of the landowner or some bureaucrat)".

Anyhow, the custom of house decorating had settled in Zalipie. Its development was greatly influenced by Felicja Curylowa (1904-1974), who was born in Zalipie and worked and lived there. The above mentioned Skanseny website says she was a unique artist, "who would paint anything that she put her hand on".

Up to now I could not trace information about any formal art training she might have enjoyed, so I guess that at the start of her career she stood in a folk art tradition. However, she had such a talent, that she was commissioned to do professional projects, like decorating the interior of a Cracov restaurant and making designs for the polish china producing company Wloclawek.

Curylowa's enthusiasm was such that she gave courses to other women in Zalipie, who in turn were available as paid artists to decorate homes of other villagers. It's about emancipation. And business.

But it's also about art of course. Because of  Curylowa's influence the style and the color scheme as found in Zalipie are unique. Bouquets of flowers are the most common motive, represented in a wonderful combination of colors.


So, Zalipie is not strictly about outsiders and outsider art environments. It's rather a mixture of folk art roots and professional and commercial elaboration. And intriguing it is, isn't it?

Felicja Curylowa passed away in 1974. In 1978 the house where she lived, was bought by the Polish Cepelia Foundation, which seeks the preservation and promotion of folk art. In the same year it was transferred into the care of the regional museum in Tarnow.


Currently the house can be visited as a museum. It's interior has been fully decorated by the artist. On the ceiling in the entrance she did her first creation, in 1914 when she was just at age ten. 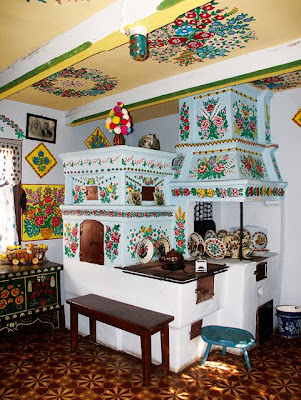 The director of the museum, Wanda Racia, is a granddaughter and student of Felicja Curylowa. The Skanseny website has more information about the adjustments needed to transform the house into a museum