This shell garden on the isle of Jersey, a British crown dependency in the English Channel, doesn't exist anymore. The site was dismantled around august 2015. At that moment it had existed for almost sixty years.

It all began in 1957 when Colin Soudain (1919-2014) added some decorations made from pebbles to the garden of his house on the isle of Jersey. He probably hadn't the intention to create a large shell decorated art environment, but when he just continued his creative activities, this eventually resulted in what was supposed to be the largest shell garden in the world.

Over a million shells were worked up in the garden, most of these collected locally on the Jersey beaches (80% according to the website of the British society of shell collectors). 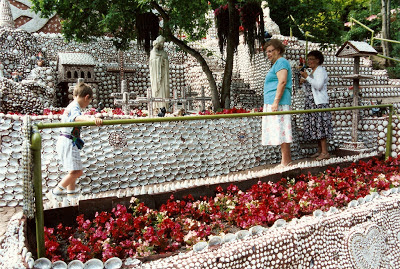 The garden had a number of terraces, all laid out with pebbles and there were miniature buildings like a church and a windmill, but also dolphins, mermaids and other representations.

At some moment, probably around 1988, the daily supervision of the garden was taken over by Jon Morgan, while Colin Soudain continued working in the garden and in the souvenir shop. 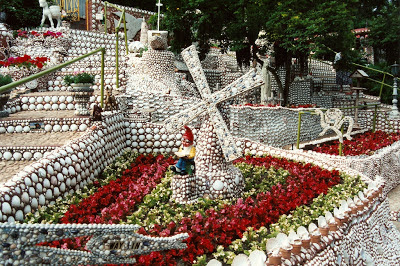 In the 1980s the site became a major touristic attraction, open for the public in the summer months. This would continue until the early 2010s.

In 2012 however the garden did not open for the new summer season, because of Soudain's health problems and in January 2014 the property was offered for sale.

After his death it appeared that the site had been bequeathed to the Jersey National Trust, but without a specific statement that the site should be kept going. Since the sale of the property also had to cover substantial medical costs, the Trust decided to respect the sale.

The property was sold to a private party and around August 2015 the house and garden have been dismantled.


A spokesperson of the Trust said that "the Trust's priority was to seek to discharge the considerable debts against the estate at the earliest opportunity, and given the poor condition of the property and the lack of access, it was felt there was no option but to continue to market it accordingly"