Facing the Atlantic Ocean, les Sables d´Olonne is a community in the west of France. It has all the nice attractions of a French coastal holiday resort: sun, sea, beaches, promenades, restaurants... but it has one attraction that is very special.

An old quarter of the town, named l´île penotte (the penotte island) is dotted with wall decorations executed as mosaics.

When Daniele Arnaud, also known as Dan, who was born in les Sables d´Olonne, settled in that neighbourhood, she got the idea to decorate the entrance of her house with a mosaic composed of shells.

From 1997 on this creative activity gradually was extended to other houses and streets in the neighbourhood and currently the entire neighborhood of l´îsle penotte has been decorated with Danielle's colorful shell frescoes. 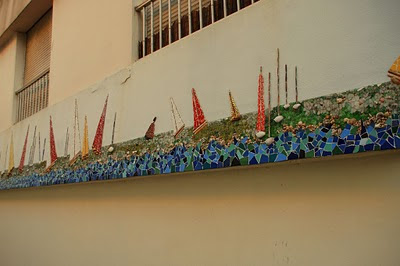 The local authorities were sympathetic to this creative variety of urban renewal and they agreed that many of the street name signs and other public utilities were adorned too.

A good decision, since this quarter of the town has become a touristic attraction. 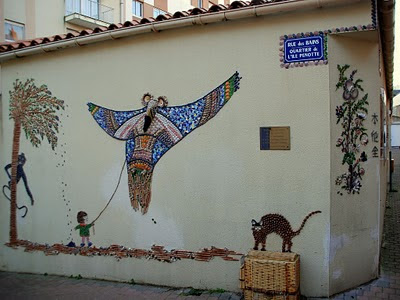 In 2013 the mayor of Les Sables d'Olonne awarded Danièle with the medal of the city, praising her for her artistic contribution to the town.

Some documentation
* Dan Aubin's personal website (in French), with many pictures and an analytic description of the different kinds of creations she makes. This website has no biographical data, and neither could I find them elsewhere.
* A photostream by Michel Craipeau on Flickr
* A series of pictures (January 2011) of the decorations on the weblog of Sophie Lepetit, here and here
* Article (September 2017) in regional journal Le reporter Sablais about a meeting to celebrate that twenty years earlier the application of shell decorations had started.

Videos
* On Daily Motion a video showing the decorations


P.S. Gaston Chaissac in the museum of les Sables d'Olonne

If you happen to be in Les Sables d'Olonne, you might visit the Musée de l'Abbaye Sainte-Croix to see their collection of the well-known French self-taught painter Gaston Chaissac, a donation to the museum by his widow.