Brizambourg is a small community of about 800 inhabitants in the western coastal department Charente-Maritime, France.


For many years there has been a charming art environment in Brizambourg, a site created by Frank Vriet (1931-2017) who was born in the community of Cognac and moved to Brizambourg, where he had a job as a mason.

In 1988 he began making brightly colored sculptures from concrete and once retired he could spend more time on this creative activity, in which he mostly depicted animals and occasionally people. 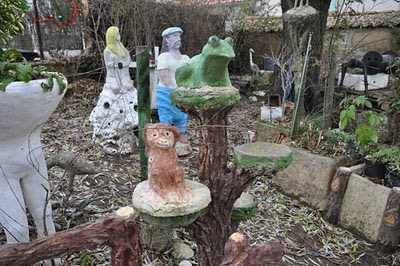 Vriet displayed his sculptures in the garden around his house. 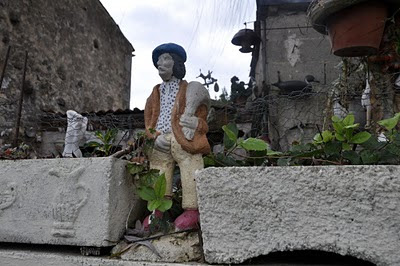 The collection has sometimes been referred to as a bestiaire, but it is not clear how Vriet himself called his site (if he ever gave it a name....).  It is probably best referred to as an animal kingdom, un règne animal.

Vriet was acquainted with Gabriel Albert, who created a sculpture garden in Nantillé, a community some 9 km north of Brizambourg. It is quite probable that Albert and Vriet exchanged information about the technical aspects of making sculptures from concrete.


The website Vallée de l'Antenne, which  presents above picture of Vriet's art environment refers to Vriet as a follower of Gabriel, saying that Vriet when young worked with Gabriel.

Franck Vriet has passed away

In an article on his weblog dated December 7, 2016,  Denis Montebello reports that Vriet's house was uninhabited and that most sculptures had been removed from the garden. At that time Vriet probably was admitted to a nursery home or he lived in a home for the elderly.

In his article Montebello says: La maison est fermée, le jardin éventré pour livrer passage au temps. Le temps fera son oeuvre, il fera oublier l'oeuvre de ce maçon né à Cognac et qui a, Dieu sait par quel miracle, changé de vie (The house is closed, the garden ripped open to give passage to time. Time will do its work, it will make forget the work of this mason, who was born in Cognac and who, God knows by what miracle, has changed his life).

As soon little or nothing will remind of Vriet's art environment, only some series of pictures will give an impression of this sculpture garden and keep its memory. 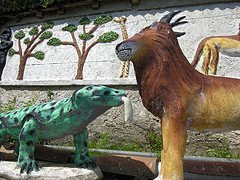 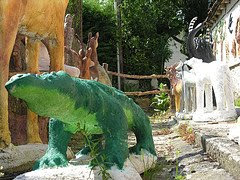 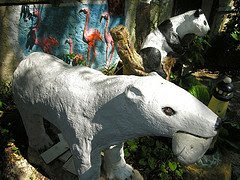 Documentation
* Website Habitants-Paysagistes (Lille Art Museum) has a series of photos by Francis David
* On Flickr an album with photos of the site (2007) by Ludowski
* Another series of photos (summer 2017, when most sculptures already had been removed) on the weblog of Sophie Lepetit.
Video
* A video (June 2019, 2'19") by regional TV Nouvelle-Aquitaine on YouTube shows some creations that still can be seen on the exterior walls (this part starts at 1'14", the preceding part is about la Maison de la Gaieté in nearby Chérac)