Part of a large collection of other animals, above dog in front of a shell- and mosaic-decorated kennel, during many years kept watch at the Hardy estate. Unfortunately, this art environment doesn't exist anymore. 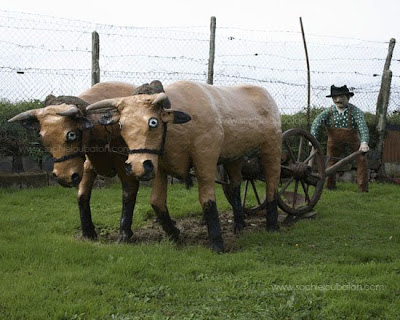 André Hardy (1921-2013) and his wife Thérèse lived quietly in Saint-Quentin-les-Chardonnets, a community of some 300 inhabitants in Normandy, France.

An ironmonger (ferronnier, in French) by profession, around 1971 -at age fifty- Hardy began making sculptures, mainly depicting all kinds of animals life-size. He displayed the sculptures in his garden which in this way was transformed into a bestiaire fantastique, a fantastic bestiary.

Hardy has been active in making these creations until the early 1990s and then, becoming older, he refrained from creating new ones, but kept active in taking care of the menagerie and welcoming visitors.

When Hardy was approaching age ninety he moved to a home for the elderly and sold his house.

Early 2011 it was announced that the sculptures were on sale through the Grenier de Marco, a French company located in Normandy, which trades in (surplus) furniture, books, garden utensils, etc.

Hardy's sculptures have been advertised on the company's website as art brut pour jardin (art brut for the garden) without any indication of prices (The relevant web page is not available anymore on the internet).

Some sculptures have been bought by the Lille Art Museum, others by private collectors, like this fisherman: