La maison de la gaieté was a restaurant in the small community of Chérac in the Charente-Maritime department in the south west of France. It has become known by its voluminous mosaic decorations.

Decorating the property was a project undertaken between 1937 and 1952 by its owner Ismaël Villéger and his son Guy, who both currently have passed away and about whom the internet has no further biographical information.

In publications the decorations of the exterior. which are the largest in size, get most attention, but the garden and the interior also have adornments with mosaic. 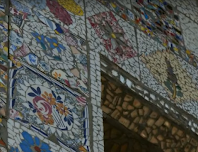 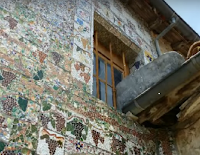 The pictorial representations were generally applied to small square or rectangular tiles, which subsequently were attached to the wall. Grapes are a recurrent motif, but one also sees depictions of flowers or arrangements of colored pieces of broken crockery with a flowery appearance.
This art environment has a specific feature: the blind side wall along the street has been decorated with two trompe-l'oeil windows, as shown in the picture below. 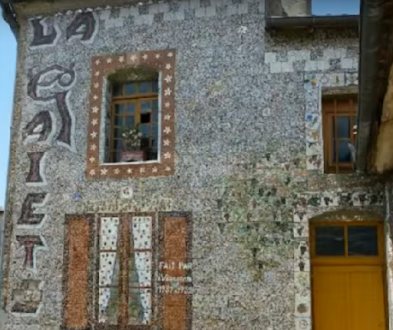 The property, where in the course of time not only a restaurant was located, but which in some periods housed a bar-dancing or a cabaret/theatre, indoor has -apart from smaller living spaces- a large room which was a dining room. And then, outdoor there is a rather large garden.

To a greater or lesser extent, all spaces have been decorated with mosaic artwork. 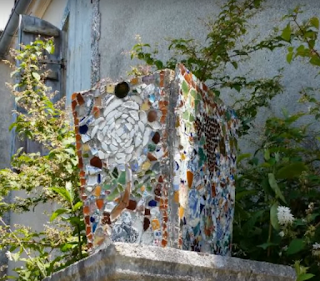 The maison de la gaieté was a popular place for entertainment and amusement until the 1970s. Later the interest of the public declined.
Sources on the internet are not clear about what happened in 1980s and 1990s, but anyhow at a given moment the community became the owner of the unused property and in the early years 2010 there were talks about transforming the site into a museum. The then mayor of the community apparently backed these plans.

The future of the site was uncertain for some years,
until in 2018 the site got a new owner

However, after local elections a new council and a new mayor took office and in August 2014 the council decided to demolish the Maison de la Gaieté and ask Bâtiments de France (the French national building authority) an advice about this. 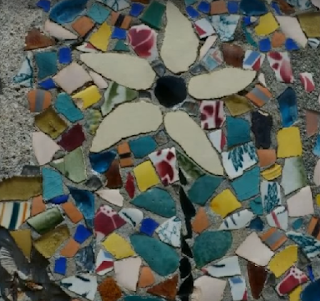 This decision generated a lot of public discussion and in November 2014 an association of friends was founded, which organized a petition to save and renew the Maison de la Gaieté.

Also because of this action the Maison de la Gaieté on August 8, 2015 was added to the Inventaire des Monuments Historiques (Historical Monuments Inventory), since it is "un témoignage d’art brut comme l’est à Nantillé le Jardin de Gabriel Albert en cours de restauration" ("a testimony of art brut as is the garden of Gabriel Albert in Nantillé ¹, which is being restored"). 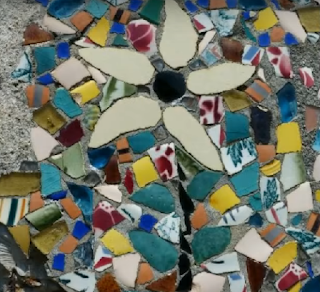 Referring to an article in a regional newspaper the association reported on its FB page that the Maison de la Gaieté got a new owner, Laurent Hervé, who plans to return the property to its original state while preserving the mosaics. The reopening could take place in March 2020.

* Video (June 2019, 2'19") by regional TV Nouvelle-Aquitaine on YouTube. This video has details of the mosaics at the exterior.  It also has some shots of what's left of Franck Vriet's art environment in the nearby village of Brizambourg