In Nizhny Novgorod, the fifth largest city in Russia, an art environment can be found that is characterized by the many toys and dolls used to decorate the site. This is Aleksey Ivanovich Shuvalov's project.

Shuvalov was born in 1942 or 1943 in the Russian community of Bol'shogo Boldina (Great Boldina), which is known from the family estate where Pushkin stayed in the 1830s.

Shuvalov first worked at a farm and later went into forestry, where he was involved in the extraction of resin from pine and other conifers.

When retired, Shuvalov wanted to avoid boredom, so around 2002 he began to embellish the garden around his house, mainly using toys and dolls as decorative material. 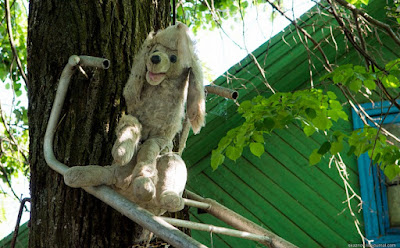 He obtained this material from his family (he has two daughters and two granddaughters), but he also found it in the garbage or got it from friends or people who know about his activities.

In an interview with a local newspaper he said that he refers to his collection as the museum of the national disgrace of household waste. 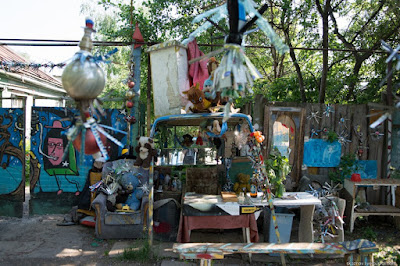 Shuvalov's embellished garden is located at the end of a street in a relatively idyllic, wooded area of the old town, where one can enjoy views of the river Oka. The site is endowed with trees and shrubs that are used to attach toy animals, dolls and other decorations.

Apart from the toys the garden also has a lot of typical decorative elements -as shown left in below picture- consisting of circular discs from wood or other material, strung together and interspersed with oblong narrow strips. The items with the strips are made from aluminum (beer) cans. The top of such a can is removed and then the cylindrical middle part is cut into strips which are folded outwardly.

It's a simple but effective way of making decorations. These items can be seen everywhere in the garden and around the house. 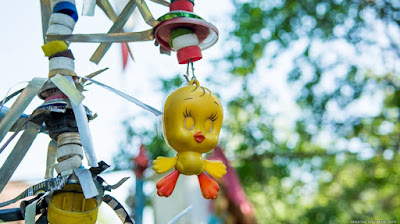 The interior of the house is also packed with objects and the walls inside are completely filled with pictures and decorations. 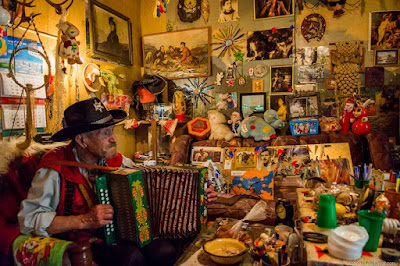 Although one of the articles in the documentation describes the site and its author in disapproving terms and says that some neighbours had complained about the site, the other article portrays the author as a friendly person who likes to show visitors around and who will even share some time at the gazebo which offers views of the river Oka.